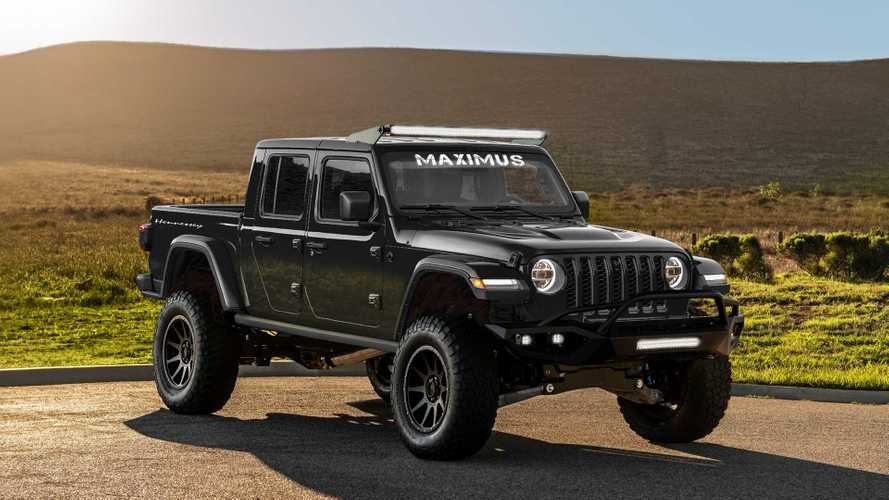 It's called the Maximus 1000, and it wants to eat your children.

Fiat Chrysler Automobiles has no plans to build a Hellcat-infused Jeep Gladiator, but that’s not stopping others from filling in the void. The Wrangler-based pickup is just beginning to make its way into public hands, but we’re already seeing Hellcat swaps, and yes, we mean swaps, as in more than one. The latest, however, goes beyond a mere engine change, because 707 horsepower is so average these days. Naturally, this mega-monster comes from Hennessey Performance, and as far as we can tell, this is the first 1,000-hp Gladiator on Planet Earth.

Hellcat All The Things:

It’s called the Hennessey Maximus 1000, and it starts with the aforementioned 6.2-liter Hellcat V8. From there, Hennessey plugs in its HPE1000 engine upgrade, and since the Hellcat isn’t native to the Gladiator, the ECU, wiring harness, radiator, and fuel system are upgrades as well. A new stainless steel exhaust system ensures the engine can breathe, and though we haven’t seen a video of the Maximus in action, we suspect the exhaust also produces a proper demonic V8 roar.

As the photos show, this isn’t just a tire-killing Gladiator. Hennessey goes after the suspension as well, adding a six-inch lift that supports 20-inch custom wheels and a big set of BF Goodrich KD off-road rubber. On the appearance side, custom front and rear bumpers are added along with LED lights, and occupants travel in an upgraded greenhouse filled with leather.

It all sounds pretty fantastic, but as you probably expect, owning a 1,000-hp Jeep called Maximus isn’t easy. For starters, you’ll need $200,000 burning a hole in your wallet, though Hennessey does say the price includes the base Gladiator.

“Our clients want exclusive, extreme vehicles that deliver a fun and exciting driving experience both on and off-road,” said company founder John Hennessey.

The second – and perhaps more challenging issue – is production. Only 24 such beasts are on the docket for construction, making it as rare as it is powerful. The production run starts in July with a target of building two per month, though it will take Hennessey a few months to get things rolling.

Production is very exclusive and limited to just 24 units. The complete cost for the MAXIMUS 1000 is $200,000 US Dollars which includes the base Jeep Gladiator truck. Production will begin in July and build time for each vehicle will be approximately four months. The company plans to build two units per month.

“Our clients want exclusive, extreme vehicles that deliver a fun and exciting driving experience both on and off-road,” said Hennessey. “Win the crowd and you’ll win your freedom was the advice that the elder gladiator gave to Russell Crow in the Gladiator movie. We could not agree more!”