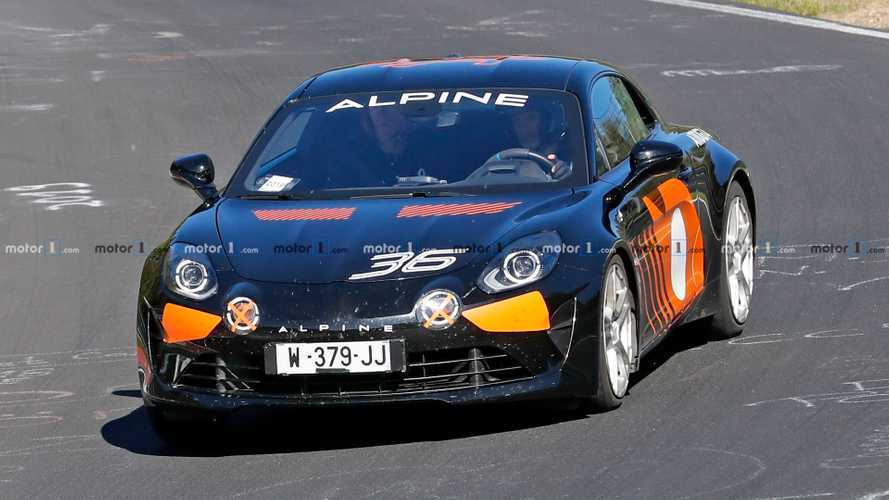 It could pack the same 296-hp engine as the Renault Megane RS Trophy.

Rumors of a hotter Alpine A110 have been swirling around the Internet since late 2017 when a report published by a British magazine said something about a lightweight version with roughly 300 horsepower on tap. Is this what Renault’s go-faster division was testing this week at the Nürburgring? We simply don’t know for sure, but it’s interesting to see the nimble coupe at the Green Hell while wearing a livery derived from the GT4-spec race car as well as the A110 Cup (both pictured below).

The “A110GT4” lettering on the sides signals the prototype has more in common with the GT4 version of the rear-wheel-drive coupe rather than the A110 Cup developed for the one-make race series. That being said, it’s missing the large rear wing of the GT4 and it also seems to be lacking the carbon fiber vented hood as well as the roll cage inside.

Chances are we are looking at a road-going version of the GT4, similar to what Porsche will be doing with the highly anticipated 718 Cayman GT4 we’ve spotted camo-free just a few days ago.

With Renault Sport dialing the turbocharged 1.8-liter gasoline four-banger to 296 horsepower for the Megane RS Trophy and the record-breaking Trophy-R, the hotter Alpine A110 could get a similar output since it uses the same engine. If true, that will represent a significant bump of 44 horses compared to the standard model.

Aside from packing more punch, it will likely go on a diet compared to the regular version, but not nearly as drastic as the GT4’s. Not that the standard car is a porker by any means, tipping the scales at merely 1,098 kilograms (2,420 pounds) in the back-to-basics Pure trim.

A best-case scenario regarding the car’s unveiling is the beginning of July during the 2019 Goodwood Festival of Speed.

Alpine received some unexpected good news yesterday when Audi announced plans to effectively kill the TT after the third generation of the sports coupe/roadster runs its course. That’s one less rival Renault has to worry about, but there’s still plenty of competition coming from the Porsche Cayman, Toyota Supra, and the BMW M2.

It Might Lose Its Roof To Go After The Boxster, Z4: