2020 Mercedes-AMG A45 Spied Looking Sedate At The Nürburgring 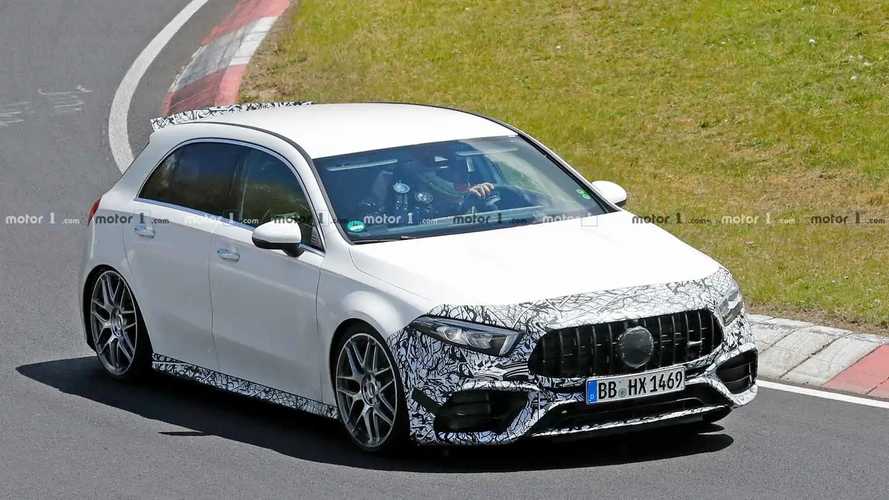 Most of the camo is gone on this prototype, but so are the big wing and diffuser.

The striptease continues for Mercedes-AMG’s new hot hatchback, the A45. Actually, we’ve seen a similar level of camouflage recently in a pair of spy videos, but the latest high-resolution photos of this white prototype caught at the Nürburgring give us a slightly better look at what should be quite a screamer.

There are some notable differences to point out on this model. The large roof spoiler and aggressive rear diffuser spied on previous vehicles are nowhere to be found this time. Instead, we’re treated to a relatively sedate version of the A45 with just a small lip spoiler crowning the rear hatch. Looking further down, only the lowest section of the rear fascia wears camo wrap, and there’s not even a tiny diffuser installed. It’s possible the section could simply be missing on this prototype, as the gaping hole between the exhaust outlets looks quite unfinished, to say the least.

It’s also quite possible we’re looking at the mild version of the A45. Mercedes-Benz has already confirmed the hot hatch will come in two flavors – the standard A45 will develop 383 horsepower (286 kilowatts) from its turbocharged 2.0-liter engine, whereas 416 hp (310 kW) will grace the A45 S model. Each variant will utilize an eight-speed dual-clutch gearbox with all-wheel drive, but aside from the extra power, nothing is known about additional upgrades the S-trim could offer. That said, an aggressive aero package for the enhanced A45 certainly makes sense.

As for other details, little is known though there likely won’t be many variations from the current A35. There’s the Panamericana grille up front, and though the platform is front-wheel-drive-based, it’s all-wheel-drive system will have several trick modes that can send power to each corner. A drift mode will also be offered for those who love to look at the world through the side glass instead of the windshield.

Expect to see the A45 revealed in September at the Frankfurt Motor Show. Unfortunately, it won't come to America.