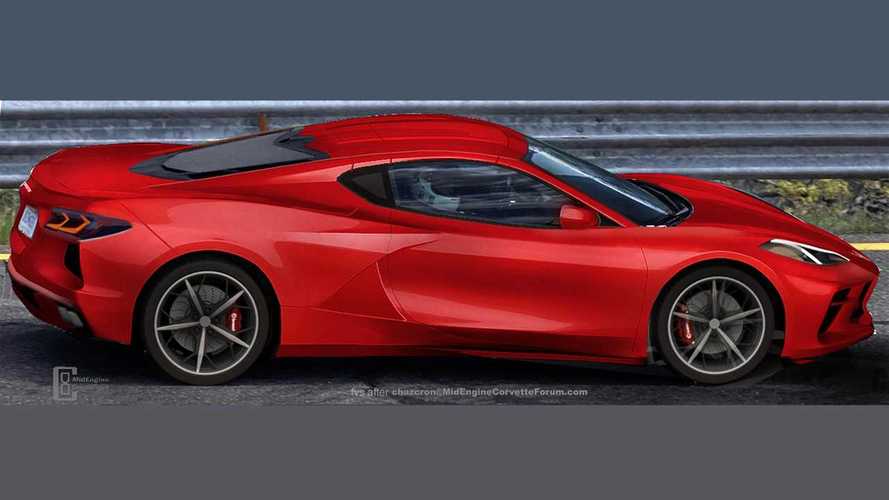 In the absence of official images of the mid-engined Chevrolet Corvette, artists continue to create renderings of what the much-anticipated model might look like. These two new depictions from Midengine Corvette Forum member fvs feature the vehicle's profile and specifically focus on two different possible appearances for the side scoops.

The rendering above imagines the top section of the side scoop creating a crease that flows down to the bottom section. This design creates a jagged section that points toward the vehicle's rear. The styling cue makes for quite an eye-catching look.

Fvs' other take imagines that Chevy's covering over the side intake is actually a red hering, and the company would remove part of the panel for the production car. The change creates an even sharper appearance at the back, but we wonder whether the inlet would be effective at directing as much air toward the engine without the extra piece guiding the flow.

Time is rapidly running out to create mid-engined Corvette renderings because the model makes its big debut on July 18, 2019, somewhere in Orange County, California. Production starts before the end of the year, and the first examples should be in showrooms in 2020.

All indications suggest the C8 Corvette initially launches with a naturally aspirated 6.2-liter V8 making about 460 horsepower (343 kilowatts) and a dual-clutch gearbox. Later, rumors suggest there would be models with a twin-turbo overhead-cam V8 offering about 650 hp (485 kW), a twin-turbo V8 with 850 hp, and possibly even a hybrid variant with an alleged 1,000-hp (745-kW).