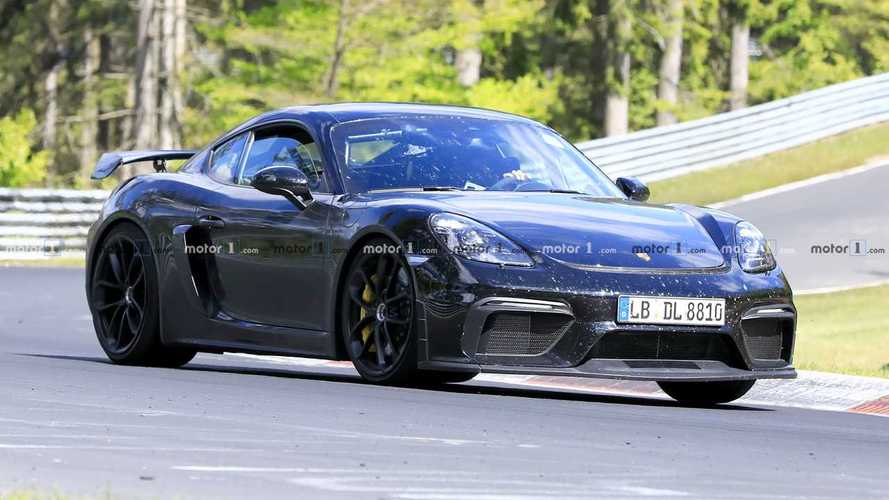 We're in the home stretch now.

We’ve had a few recent sightings of Porsche’s hot GT4 variant of the 718 Cayman. It's no surprise; with spring weather enveloping the Nürburgring, spy photographers and videographers are camped out around the track with cameras in hand, and this delectable black Cayman GT4 landed in the crosshairs. We’ve seen the sports car nearly naked before, but this time we don’t see a single piece of tape anywhere. Even the Porsche crest on the hood is in plain sight.

In other words, Porsche is dialing in the final adjustments for what should be a very lively machine. It wears updated front and rear fascias compared to the standard Cayman, and of course, there’s the massive wing at the back to help keep the mid-engined racer planted to the pavement. It will need all the aero help it can get, because the latest rumors say it could carry a detuned version of the epic 4.0-liter six from the 911 GT3. Porsche will reportedly keep the Cayman GT4 naturally aspirated, and as of right now, the GT3’s high-strung offering could be the best match.

That’s not to say the Cayman will strut around with the GT3’s power. The engine will almost certainly be turned down a few notches, with 420 horsepower (313 kilowatts) still being the figure we’ve been hearing most often. That will be more than enough to make this car seriously fast, as the GT4’s aero changes also come with a weight loss expected to be over 100 pounds.

If you’re thinking a camo-free Cayman means a reveal is nigh, you’re right. We haven’t heard anything official, but the unofficial word is that the high-performance Porsche will wow crowds at this year’s Goodwood Festival of Speed. The U.K. event is held in July, so we have two more months to wait.