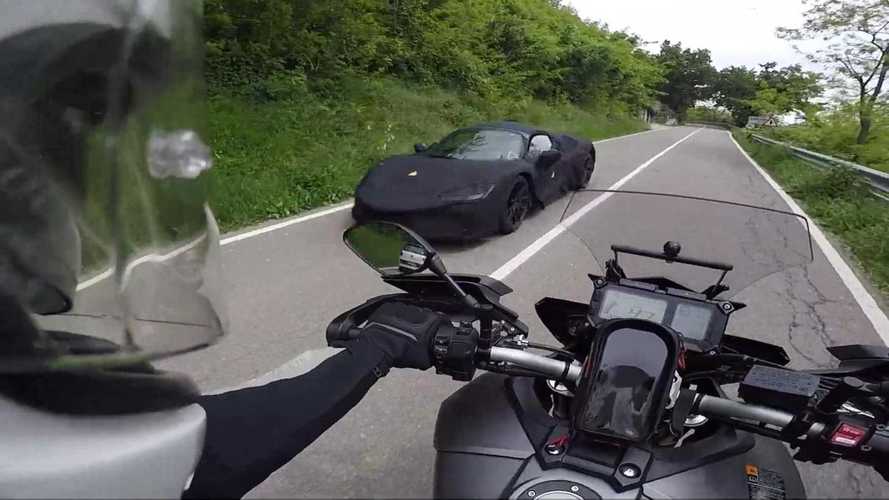 A motorcyclist saw the electrified Prancing Horse in traffic and decided to follow it.

[UPDATE] The spy video has been removed from YouTube.

Ferrari has the worst luck when it comes to keeping its electrified supercar out of the public eye. It was only a few days ago when two people inside a 488 Spider decided to basically stalk the new Prancing Horse, and now a motorcyclist has shared footage of his weekend ride during which he stumbled upon a heavily camouflaged prototype of the new Ferrari.

According to members of the Ferrari Chat forums, these nice roads are located on the hills near Maranello where Ferrari has its headquarters. While the video is far from being revealing as far as the supercar’s design is concerned, we do get to witness some of the performance its electrified powertrain will deliver during some short acceleration runs to overtake the cars in front. To get a vague idea about how fast the prototype is going, check out the motorcycle’s speedometer while the Ferrari driver is stepping on the gas.

Due to an annoying wind noise dominating the soundtrack, we don’t get to hear what will likely be a V8 rumble. On the flip side, the motorcyclist equipped with a helmet-mounted camera and riding his Yamaha Tracer 900 does a good job at keeping up the pace with the Ferrari. Throughout most of the entire video, we get to see the rear end of the supercar, but towards the end of the clip – at the 5:05 mark – the two have a tête-à-tête in traffic and we catch a glimpse of the front fascia.

Positioned above the 812 Superfast, the new Ferrari will debut on May 31 with a hybrid powertrain offering a combined output of 986 horsepower. Little else is known about the car, but the rumor mill indicates it will do the 0-60 mph (0-96 kph) sprint in an amazing 2.0 seconds. If true, the yet-to-be-named Ferrari will be the quickest-accelerating production car taking into consideration the 1.9-second Tesla Roadster and the 1.85-second Rimac C_Two will arrive at a later date.