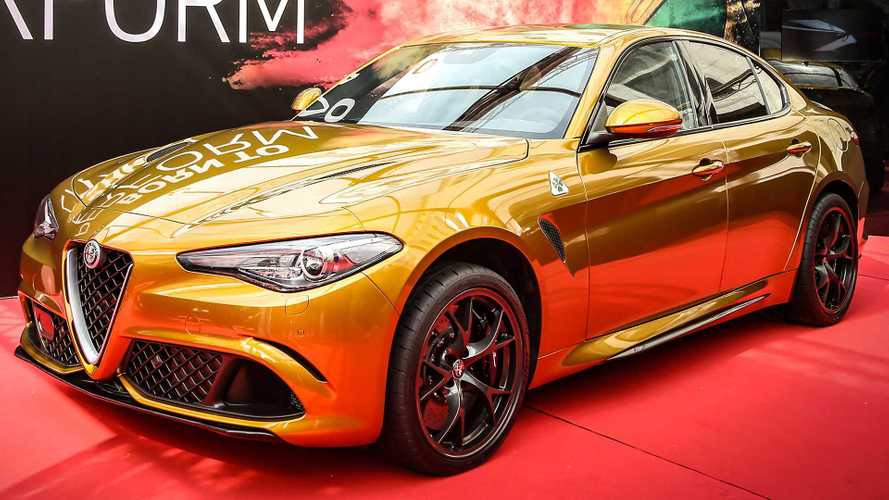 There are a lot of classic Alfa Romeos at the Mille Miglia this year, in addition to this modern Giulia in a vintage-inspired color.

As a special surprise during 2019's Mille Miglia, the Alfa Romeo Giulia showed off a new Ochre paint color. The shade appears to be a bronze hue with an infusion of orange to make it a little warmer.

Alfa intends the color to evoke a similar shade available on the brand's models in the 1960s and '70s. The comparison below shows the new hue practically has a mirror finish, whereas the original is duller and more akin to a satin appearance. The similarities are still definitely noticeable, though.

If this vintage-inspired color fits your style, we have some bad news. "This special Ochre paint job was just a one-off, special color to showcase the Giulia Quadrifoglio, and it's an ode to the Mille Miglia," Berj Alexanian, Alfa Romeo spokesperson in the U.S, told Motor1.com. "A this time, we have no plans to bring it into production."

This bright color might be too ostentatious on a larger vehicle like the Stelvio, but it could be a perfect attention-getter on the Giulia. Let's see if Alfa Romeo uses this one-off as a chance to gauge public reaction and consider whether adding this shade to the sedan's palette.

The timing of Alfa Romeo showing off a Giulia in Ochre comes barely a week after Lexus' unveiling of the LC 500h Matte Prototype Concept in Space Orange. It's intruguing to see two automakers experimenting with hues of burnt orange in such quick succession on one-off models.

Let us know in the comments what you think of these pumpkin-tinged shades. Which model wears it better, the Lexus LC or the Alfa Romeo Giulia?

Postcards of Italian beauty in a race between past and future

Today, the unbreakable bond with Alfa Romeo's unique heritage is expressed in the new Ochre paintwork of Alfa Romeo Giulia: the modern reinterpretation of a historic colour.
Yet another way of renewing the Alfa Romeo legend on the roads of the 1000 Miglia, more than ninety years after the first win.
430 cars in the event: 44 are historic Alfa Romeos, from the best-represented constructor, which also provides Giulia and Stelvio for the official convoy.
Yesterday's first stage took the caravan from Brescia to Milano Marittima, 322 km, accompanied by the crowds of enthusiastic spectators always drawn to this event.
At the end of the day, the standings were headed by two Alfa Romeos: the 6C 1750 SS number 81, driven by the Vesco-Guerrini team and, close behind, the 6C 1500 SS number 59 FCA car driven by Moceri and Bonetti.

After the sealing and racing and technical inspection procedures, the first stage of the 2019 1000 Miglia got under way yesterday. A memorable edition with 430 crews taking part: almost 900 people, with every continent represented. Alfa Romeo is the automotive constructor with the largest group, including 44 official and private entrants, as well as an impressive fleet of current production cars in the official race convoy. Quite fittingly, since the one thousand imperial miles of the "world's finest travelling museum", as Enzo Ferrari defined it, are the ideal backdrop for appreciating the Alfa Romeo brand's peerless history and its future-focus that never forgets a glorious past.

Every one of the brand's cars has always incorporated the five ingredients that make it one of the world's most desirable brands on the automotive stage: distinctly Italian styling; innovative, state-of-the-art engines; impeccable weight distribution; unique technical solutions; and an outstanding power-to-weight ratio. What's more, the cars' design also features clear references and tributes to the timeless lines of Alfa Romeo's greatest successes, starting from the unmistakable front cloverleaf and the badge, both iconic and immediately recognisable. One significant reworking of a historic characteristic is the Ochre paintwork that delighted the fans at the start of the 1000 Miglia.

Indeed, one Alfa Romeo Giulia model on show in Brescia bore the distinctive colour that appeared on its predecessors and other models in the Sixties and Seventies. This shade underlines the Alfa Romeo Giulia's very short overhang and large front mudguards, the set-back cockpit resting over the drive wheels and the muscular rear mudguards. A combination of taut lines and sleek, dynamic proportions that was a feast for the eyes of the fans present at the starting line.

First touch on the throttle in Brescia

The cars left Viale Venezia at 14:30 hrs and in half an hour were on the shores of Lake Garda, for the first regularity trials with the first stamp inspections. In fact, the journey towards the final destination of Cervia-Milano Marittima includes a series of timed checkpoints and stamp inspections. At the start, every competitor receives a timesheet which must be stamped at specific times, which vary depending on the car's starting position. Apparently complex, this system becomes more and more natural as the race progresses. The route, set by a roadbook, also includes time trial sections. These have to be covered in a given period of time, at a specific average speed. Which is more fun, pure speed or regularity? There is no one answer and opinions differ, although of course every driver shares the will to win that takes over once the competition starts.

One of the secrets of the 1000 Miglia's almost a century of success is the perfect integration of four-wheeled masterpieces into lovely landscapes and roads often well off the beaten track. Instead of the motorways full of hurrying commuters and holidaymakers, the race uses state, regional and provincial highways, where participants can savour the beautiful Italian countryside and fully appreciate the proverbial pleasure of driving Alfa Romeo cars. The sheer power of the "Alfa Romeo Racing" Quadrifoglio momentarily shattered the rural quiet and the elegant rose gardens of Parco Giardino Sigurtà at Valeggio.

Then came the town circuit through Mantua, an urban museum that welcomed the travelling museum, after which the route ran along the border between the Lombardy and Veneto regions and beside the banks of the Po River, sun-drenched but rather cool. The cars reached Ferrara as the sun was starting to set. The streets were crowded and as evening approached, more and more people thronged the pavements and verges to watch the cars pass, almost falling silent as they paraded past the Castello Estense. From Comacchio southwards, the route took the cars through a succession of seaside villages, the sunset bathing the stork colony near the town of Fosse Ghiaia and the drivers began to tire during the last dash towards Ravenna..

The crews were sustained in this final leg by boundless, universal passion, and it was dark when the first car passed the Parco della Salina at Cervia and finally arrived in Milano Marittima. However, the 1000 Miglia never rests, even in the shade of the pine woods:, while the drivers and navigators went to eat and rest, knowing that they had only a few hours of sleep ahead of them, the mechanics got to work to tend the cars. A fine sight, a blend of hard work, dedication and authentic passion for the wonderful cars which today set off at 06.15, travelling south across Italy on their way to Rome.