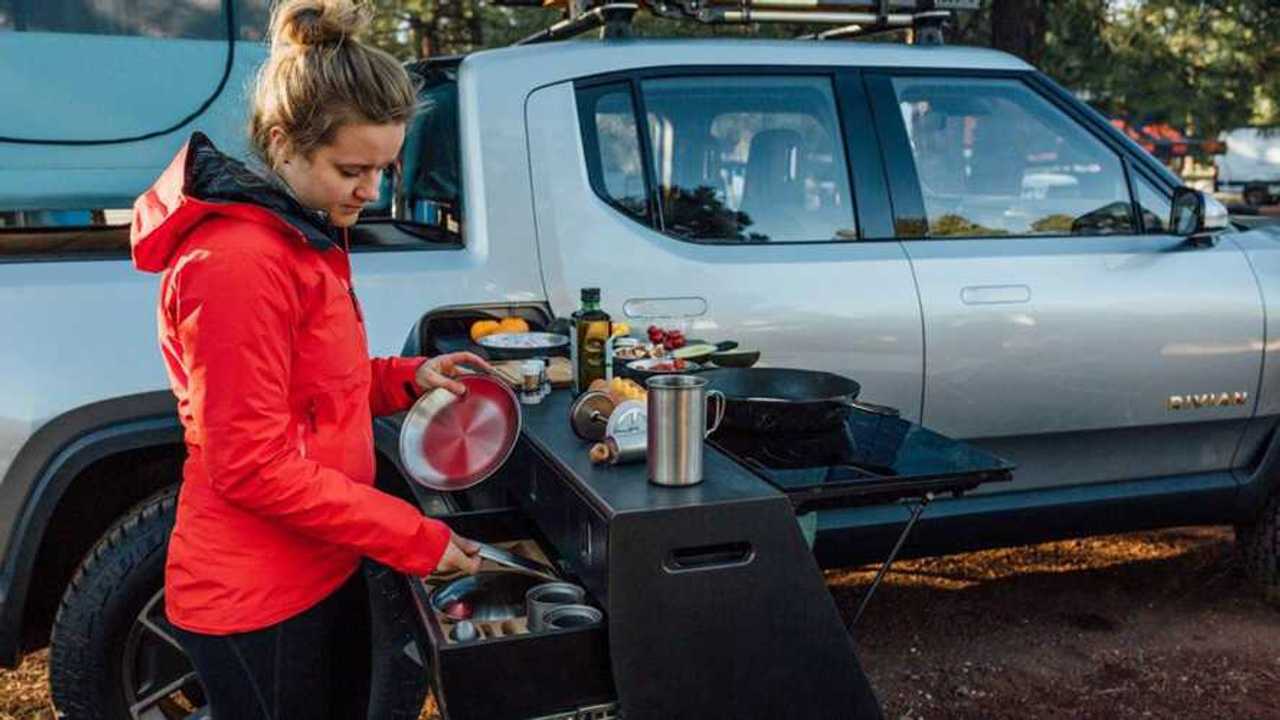 Its massive battery pack powers the truck and a built-in electric stove for cooking at the campsite.

Overland Expo West is happening right now in Flagstaff, Arizona, and EV automaker Rivian is there with its forthcoming R1T pickup truck. Being a show dedicated to off-road explorers and adventure campers, Rivian decided to dress up its model with some gear that overlanding aficionados might appreciate. In the process, Rivian gains the distinction of having the first electric vehicle ever on display at the 10-year-old event.

Compared to other rigs on display at the expo, Rivian’s ride is conservative yet functional as a full-service off-roader for a weekend camping getaway.  A bed-mount tent with an access ladder provides cozy off-the-ground sleeping accommodations for two, while a roof rack offers extra storage for gear. The truck’s really cool feature, however, is its custom slide-out kitchen with storage for food, counter space, and an electric stove. It’s built into the truck’s gear tunnel at the front of the bed just behind the cab, and since the Rivian R1T is a fully electric vehicle, the stove draws power from the ample on-board battery.

And we do mean ample – Rivian says the truck is fitted with the world’s largest automotive battery pack at 180 kWh. As such, a week of cooking and lighting up the campsite will only consume 11 percent of the battery. Exploring the terrain, however, will use up the juice more quickly, especially since Rivian pegs the R1T as having a combined 750 horsepower (559 kilowatts) from four electric motors, one turning each wheel. Overall performance details are still unknown, but we do know this electrically-charged off-roader has a range of 400 miles, and with its sealed battery pack it can wade through 36 inches of water.

The R1T is still in development, but our colleagues at InsideEVs say it will likely beat Ford and General Motors to the punch as the first all-electric pickup truck to go on sale. As of now, that's expected to happen sometime late next year.

The R1T is the first EV to appear at an Overland event.

“We’ve been coming to Overland for a few years now, learning from this community how they use their vehicles,” said Rivian Creative Director Larry Parker. “Much of what we’ve learned from Overland attendees has gone into our product design."

The R1T displayed at Overland West features a custom electric camp stove powered by the vehicle’s battery pack. The stove slides out from the vehicle’s gear tunnel for use, providing emissions-free kitchen capability.

Overland is a ten-year-old festival dedicated to the practice and gear of overlanding, a self-contained, vehicle- based exploration style inspired by safaris and other extended travel. Camping, cooking and outdoor recreation are at the core of overlanding.

Meet the R1T: The R1T will be at all three days of Overland West. At 2PM on Friday the 17th, 9AM and 2PM on Saturday the 18th, and at 1PM on Sunday the 19th, the Rivian team will be conducting walkarounds of the R1T, diving deep into the features that differentiate the vehicle from other outdoor vehicles and EVs.

The Outdoors and the R1T: facts and features

-With 750 horsepower and immense torque, the R1T comes designed for heavy loads and can tow up to 11,000 pounds.
-A ‘gear tunnel’ and front trunk allow for much more sealable storage found in a conventional off-road vehicle.
-At 180kwh, the R1T has the world's largest, most durable automotive battery pack.
-The R1T and R1S offer up to 14 inches of ground clearance with adjustable air suspension.
- During downhill braking the R1T restores over half the energy used on the same upslope.
- Detailed, downloadable maps are available in the R1T’s user interface, so you can navigate even when offline.
-The R1T comes with a built-in air compressor and alarmed gear security loops.
- Users can light their surroundings and cook using the vehicle’s power for over a week using only 20 kWh– or 11%– of the largest 180kWh Rivian battery pack.
-The R1T is powered by four independent 200hp motors for maximum power and control.
- With its fully sealed battery pack and drive units, the R1T can wade through up to three feet of water.

About Rivian
Rivian is developing vehicles, technology and services that inspire people to get out and explore the world. Rivian has development centers in Plymouth, Mich.; San Jose, Calif.; Irvine, Calif.; and Surrey, England; along with a 2.6-million-square-foot manufacturing plant in Normal, Ill. Rivian will launch the R1T and R1S in the U.S. in late 2020, with introduction to other global geographies starting in 2021. Rivian is now accepting pre