This Is What A Toyota RAV4 TRD Pro Would Look Like 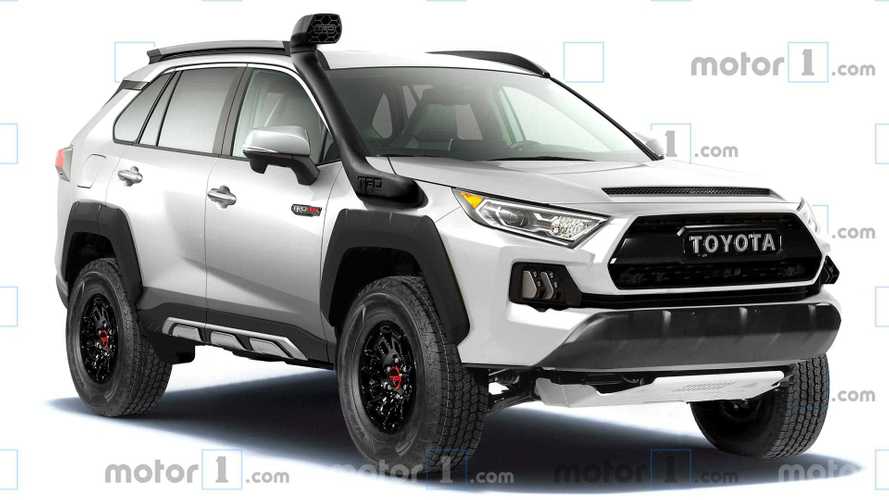 This is the hardcore off-roader that could still be a comfy daily driver.

Toyota reserves the TRD Pro branding for the most hardcore off-roading variants of the 4Runner, Sequoia, Tacoma, and Tundra, but our new rendering imagines how the compact RAV4 might look with these rugged tweaks. The version might not be as capable in the mud and on the rocks as the bigger TRD Pro models, but it'd offer enough performance for many customers, without compromising on-road driving.

Check Out More Of Motor1.com's Renders:

Toyota has a set recipe for creating its TRD Pro trims, so imagining the parts on a RAV4 isn't too hard. Fox Racing shocks with multiple bypass zones and a lifted suspension are a common element on these models, so our RAV4 sits higher than stock. Black wheels with all-terrain tires are also generally part of the package. A bigger skid plate up front is both aesthetically attractive and functional for protecting the engine and transmission from obstacles.

The 2019 Tacoma TRD Pro also gains an optional snorkel intake on the passenger side A-pillar. While not a standard feature, the piece looks so cool that we include it in our rendering. The higher inlet would also make sure that the engine breathes clean air when driving through a dusty environment.

The closest competitor to a RAV4 TRD Pro would be the Jeep Compass Trailhawk. The Toyota's 2.5-liter four-cylinder with 203 horsepower (151 kilowatts) and 184 pound-feet (250 Newton-meters) would have the output advantage over the Jeep's 2.4-liter with 180 hp (134 kW) and 175 lb-ft (237 Nm). The Compass Trailhawk might have an edge when off-roading because of its low-range gearing with a 20:1 crawl ratio and Selec-Terrain system for tailoring the drive mode for Snow, Sand, Mud, and Rock conditions.

If looking at this RAV4 TRD Pro has you wanting to put down a deposit for one, then there's bad news. "The Toyota TRD Pro has really been about that body-on-frame heritage," Toyota's Group Vice President and General Manager Jack Hollis told Motor1.com about the model's prospects for production at the Chicago Auto Show. He recommended the RAV4 TRD Off-Road as the closest alternative.