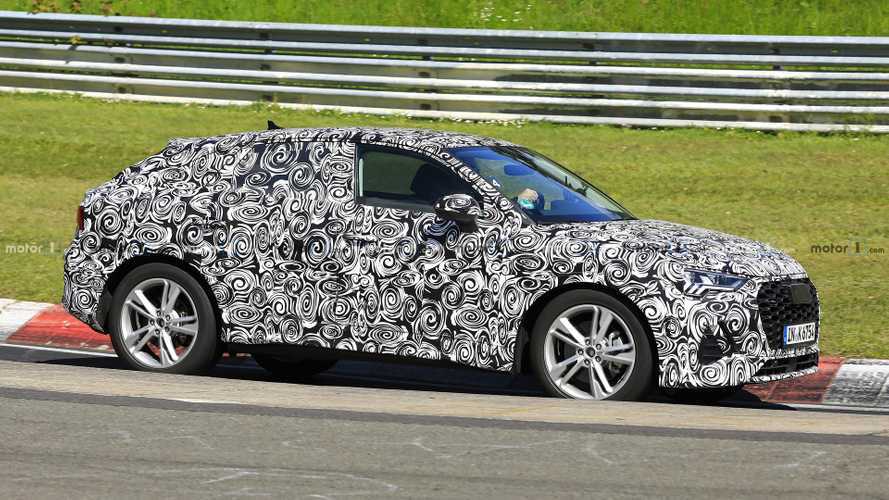 It's for those who want a sleeker Q3 and are willing to pay a premium.

[UPDATE, May 16] 16 new spy shots have been added at the beginning of the gallery, below.

There used to be a time when Audi’s SUV lineup was limited to the brick-like Q7, but in recent years, the portfolio has blossomed to include everything from a pint-sized Q2 to the large-and-in-charge Q8. The Four Rings also have the E-Tron and the upcoming E-Tron Sportback electric SUVs, while Audi Sport has promised to spice up its portfolio with a number of RS-badged SUVs.

Here we have yet another new member of the family while undergoing final testing at the Nürburgring. Previously referred to as the Q3 Sportback, the model in question will actually go by the name of Q4 once it will be officially revealed in the coming months. It’s going to be built at the company’s Győr factory in Hungary where the standard Q3 is being put together along with an assortment of models from the A3/S3/RS3 and TT/TTS/TT RS lineups.

The third coupe-SUV in the marque’s lineup after the aforementioned Q8 and E-Tron Sportback will follow the same recipe by getting a heavily sloped roofline to create that coupe illusion (well, not really). That will negatively impact visibility as the greenhouse will be slightly smaller, while headroom for rear passengers is probably going to take a hit as well compared to the regular Q3. In addition, the somewhat sleeker rear end could eat into the available cargo area, but I guess that’s the price to pay for wanting something a bit more special.

It goes without saying that just about everything will be borrowed from the Q3, all the way up to a turbocharged 2.5-liter five-cylinder engine for the fully fledged RS variant. This is more than just an assumption we’re making as the RS Q4 has already been spied not that long ago. As a matter of fact, it might not be too far behind considering the prototype looked just about ready to drop the camo and reveal its production body. While it won’t be unveiled together with the regular Q4, chances are those interested in the hot coupe-SUV won’t have to wait for more than just a few months to see Audi Sport’s take on the Q4.

The wraps should come off just in time for the 2019 Frankfurt Motor Show scheduled to take place in September. Sales, at least in Europe, are likely to start before the year’s end or early 2020. Needless to say, the Q4 will be a tad bit more expensive than the equivalent Q3.

Get Up To Speed With The Q4:

First-Ever Audi Q4 Loses All The Disguise In New Rendering