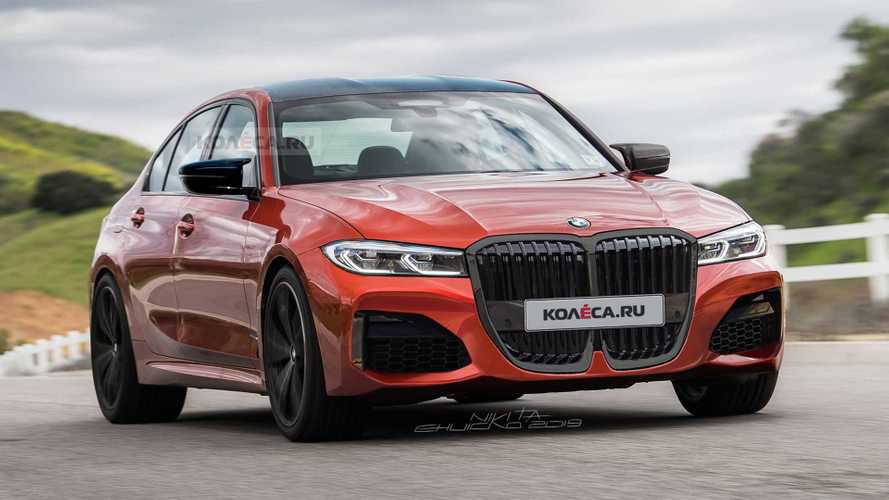 A Russian automotive website has rendered the upcoming M3 with massive kidney grilles.

The upcoming BMW M3 is expected to be the fastest one yet. A Russian car website, kolesa.ru, has rendered the new car.

The artist chosen for the task seems to think that BMW will put massive kidney grilles on the car. While we hope they're wrong, they might be on to something, especially considering the giant grilles on the new 7 Series and X7.

On the renders, the grille extends below its usual area, expanding into the area usually reserved for the lower grille. In fact, it appears that the lower bumper's center opening has been completely overtaken by the kidney grilles and simply bisected.

With this design, you'd have to actually mount your front license plate nearly dead center of the grille, or off to the side, in one of those no-drill mounts that utilize the threaded tow hook attachment point.

That is, unless that area, too, has been overtaken by the grille. The kidney grilles on the new BMWs seem to grow larger on each new model. Although the 3 Series is much smaller than the 7 Series, nothing would surprise us at this point. Maybe the new M3's grille will be even larger.

This rendering isn't a mere joke or a flight of fancy, according to kolesa.ru. The new M3 will differ significantly from the current 3 Series. Insiders have stated that the new M3 will have a substantially larger grille with large, vertical nostrils, not unlike a pair of Alfa Romeo grilles placed side by side – or an Audi grill split in half.

Part of us misses the days when BMW's styling was understated and sedate. Of course, we'll wait to see what the finished car looks like before we make our final judgement. If the production M3 looks anything like this, though, it will have to be a pretty impressive performer to make us overlook that unfortunate nose job.