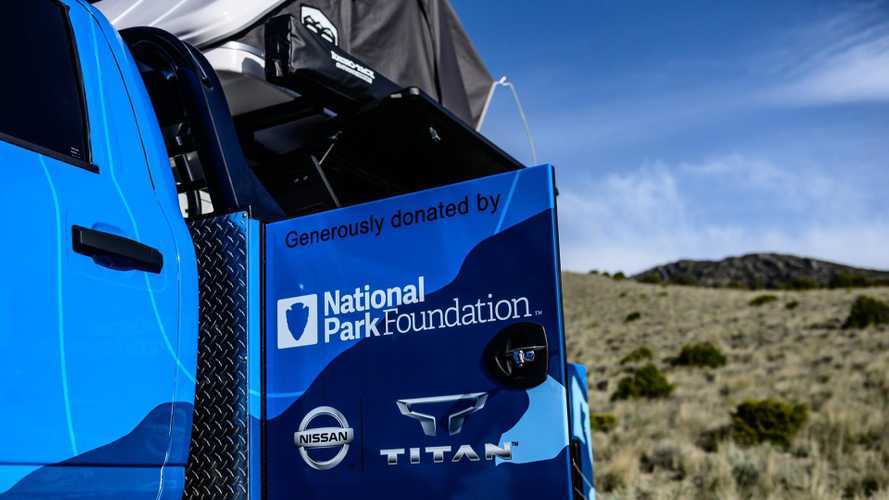 There's even room to sleep on top.

The third and final custom Nissan Titan debuts on May 16, and a new teaser provides the first real look at the custom truck. The company builds the brawny rig as part of the Calling All Titans charity initiative. This one benefits the National Park Foundation, which is the official charity of the United States' National Park Service and its 418 national park sites.

The new teaser doesn't show much, but thankfully the previous one (below) provides a better look. The truck's bed gains a variety of storage areas in the side for carrying tools and gear. The central part is still accessible for hauling longer items. A rack appears to have a pop-up tent for providing a place to sleep while spending a night in a national park. A second, roof-mounted rack carries spare wheels. Given all the extra storage space, a ranger should have no problem carrying all of their tools into the wilderness.

Nissan doesn't say where the custom truck debuts, but the timing of its unveiling comes at the same time as Overland Expo West starting on May 17. The event celebrates camping vehicles, so the spot seems like a perfect spot to show off this rig.

Clash With The Nissan TItan:

The last product of the Calling All Titans project was the Ultimate Work Titan the benefitted Habitat for Humanity. It featured an exterior with lots of toolboxes and a roof rack for carrying ladders. The interior included a mobile office.

The first result of this initiative was the Ultimate Service Titan for the American Red Cross. The rear has a mobile command center for the life-saving organization, and the space included a work area, kitchen, and even a refrigerator for blood storage.