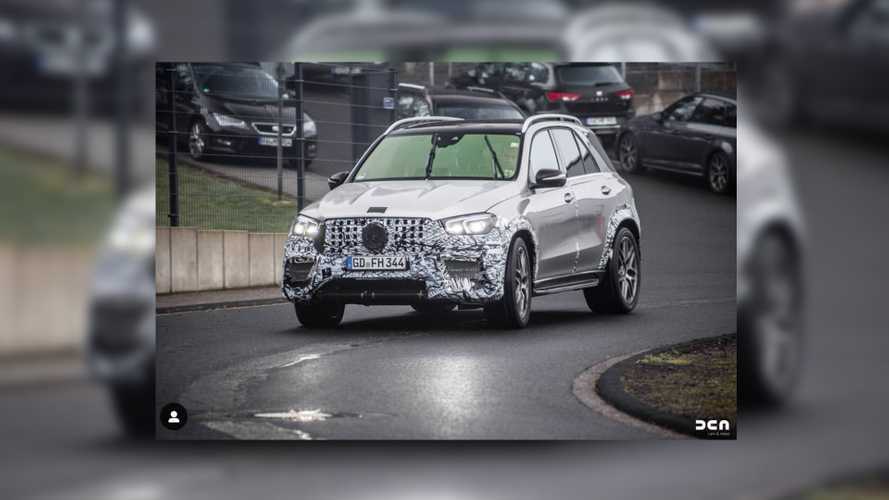 There should be a 550-horsepower V8 under the hood.

Sightings of the next AMG-infused GLE-Class have been few and far between. DCN Cars on Instagram was in the right place at the right time to catch the elusive crossover, and Motor1.com was graciously given permission to feature the sighting here. The camo wrap is still very thin based on our previous sightings, relegated primarily to the front and rear where we expect to see the greatest visual changes from the AMG team.

The front carries the heaviest concealment with some false panels throwing off body lines around the lower corner intakes. There’s also the covering over the Merc’s grille, likely hiding the same vertical-bar treatment given to the recently revealed GLE 53 model. At the rear, the GLE 63 will wear a nearly identical fascia with a diffuser incorporated down low, but the quad exhaust outlets are larger and squared off.

Adding a bit of aggression isn’t necessarily the only reason those exhaust outlets are a bit beefier. Residing under the hood of the GLE 63 should be an AMG-tuned 4.0-liter twin-turbo V8, naturally driving all four wheels through an automatic gearbox. There’s been no definitive word from Mercedes on exactly how powerful the high-performance people mover will be, but the rumor mill strongly suggests the mill will offer at least 550 horsepower (410 kilowatts). That’s a hefty jump from the 429 hp (320 kW) I6 available in the GLE 53, but we also recently learned that Mercedes could offer a non-AMG version called the GLE 580 that would offer a detuned version of the V8. Thought to be rated at 483 hp (360 kW), it would fill the gap between the two models nicely.

We have to believe Mercedes is on the cusp of finally going official with the GLE 63. Spy photos from the last six months have shown the same level of minimal concealment, and with the GLE 53 officially here, it should just be a short stretch until its big brother arrives. We’re hedging our bets on a reveal either towards the end of summer or in the fall.