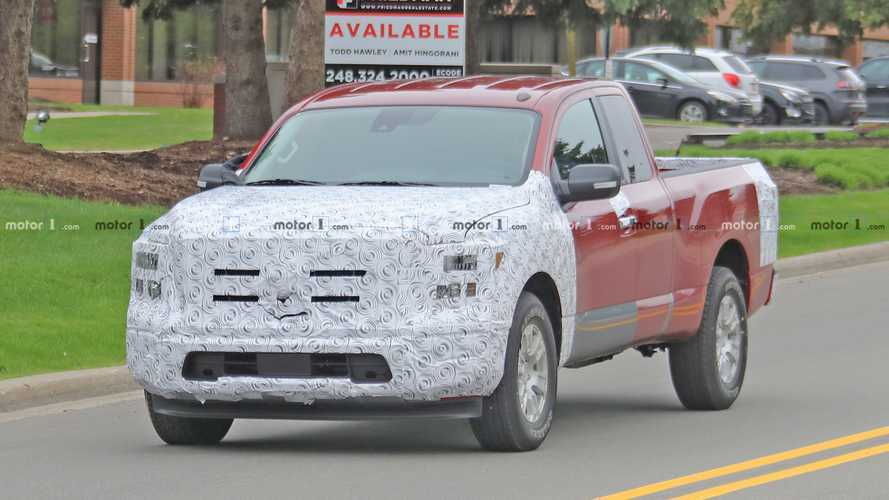 Sometimes the best disguise is pretending to be something else.

Often overlooked as a player in the full-size pickup truck segment, the Nissan Titan is just as beefy as its half-ton competition. The big pickup launched its second-generation in for the 2016 model year, and it appears a modest facelift is on-deck to help keep the truck current. Spy photographers in Michigan caught this prototype near Detroit, and we suspect the strategically placed openings for the headlights and grille on front-end camo wrap aren’t simply a coincidence. With the truck’s existing down-kink for the side mirrors on the doors already similar in design to the Ford F-150, a casual glance at this test vehicle might leave onlookers thinking they just saw a Blue Oval pickup.

We’re not fooled, however, and actually, we suspect the changes beneath the swirling wrap are relatively minor. Expect a new grille that could incorporate design cues seen on more recent Nissan vehicles like the Altima, along with redesigned headlights. A close look at the prototype suggests the new eyes will at least retain the Titan’s current overall dimensions, but details are well-concealed here. Similar changes appear to be in store at the rear, with new taillights that still hold the same space as the current units.

We haven’t heard anything specific with regards to interior changes, though with a lack of camouflage across the much of the truck we suspect changes to be minor, if anything. A technological update might be in store, though the odd piece of camo wrap on the outside driver door handle is a curious thing. Similarly, there isn’t much to report with powertrain changes save for continued rumors of a V6 engine coming for base model Titans. Rumors also suggest the Cummins diesel option could disappear in the next couple years, leaving the 390-horsepower (291-kilowatt) 5.6-liter V8 as the only powerplant.

Updates On The Way:

We believe this facelift is destined for the 2020 model year, based on the relative lack of camouflage and Nissan’s recent tendency to have public prototype sightings just a few months ahead of a reveal. If that’s the case, look for the new truck to shed its coverings later this year.