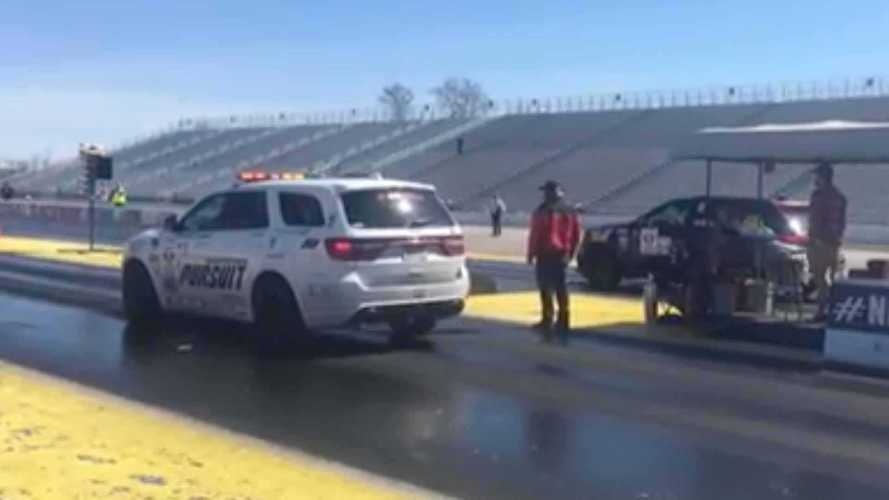 These are two incredibly quick SUVs.

The Dodge Durango SRT Pursuit Speed Trap is one of the coolest vehicles competing in this year's One Lap of America event. A recent video provided a taste of its acceleration ability, and now a new clip caught the mean SUV on the drag strip. To make the race even better, it was going up against a Jeep Grand Cherokee Trackhawk – a close cousin to this mighty machine.

The Speed Trap launches off the line but has an extremely hard shift into second gear that lets the Jeep catch up. Instagram user iambmw85 says the Durango "handily beat" the Grand Cherokee Trackhawk. That wasn't obvious in the video, though, because they appeared to be fairly close at the end of the quarter mile.

See More Of This Mean Durango:

The Durango SRT Pursuit Speed Trap uses a supercharged 6.2-liter V8 from a Challenger SRT Hellcat Redeye where it makes 797 horsepower (594 kilowatts) and 707 pound-feet (959 Newton-meters) of torque. The engine has additional modifications like Kooks long-tube headers, high-flowing catalytic converters, and low-restriction cat-back exhaust. The revised suspension has Mopar Performance springs that lower the ride height, and the SUV rides on 20-inch wheels with Pirelli performance tires.

For comparison, the Jeep Grand Cherokee Trackhawk also has a supercharged 6.2-liter V8, but the engine makes 707 hp (527 kW) and 645 lb-ft (875 Nm). This one would likely have some performance modifications since it is competing in One Lap of America.

The 2019 One Lap of America runs from May 4 to May 11. There are two events left as of this writing, and the Durango SRT Pursuit Speed Trap is currently in 16th place overall out of 77 total competitors.

Source: iambmw85 via Instagram, One Lap of America via Mopar Insiders