MS-RT, the company that surprised us with the tuned Transit Custom about a year ago, has a new impressive project. First details are in for the Transit Connect by MS-RT, which receives a similar treatment as its larger brother. And, again, we think it’s super cool.

The tuning firm, which says it uses styling and technology pioneered by Ford’s works rally team, designed, developed, and built the sporty van at its factory in Pontypool, South Wales. As you can easily see in the gallery below, the compact van features a complete aggressive body kit consisting of a custom front bumper, grilles, front diffuser, side skirts, rear bumper, rear diffuser, and spoiler.

The Transit Connect rides on 18-inch OZ Racing wheels wrapped in Michelin tires. Power comes from the factory 1.5-liter EcoBlue diesel engine delivering 118 horsepower (88 kilowatts) and 199 pound-feet (270 Newton-meters) of torque. Yes, those numbers don’t match the overall appearance, but MS-RT at least makes sure the exhaust sound is proper thanks to a quad-tip stainless steel exhaust system. The vehicle will be offered with either a six-speed manual or an automatic.

Inside the cabin, the tuners put a carbon inlay sports steering wheel, as well as a hand-made Nappa leather and suede interior. MS-RT will sell the van with an exclusive gift pack, which includes a special logoed bag with products to help keep the van in “tip-top condition.” The first 40 units of the tuned workhorse, part of a Launch Edition series, will feature upgraded alloy wheels as standard and a special interior. 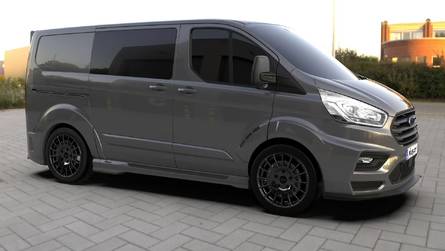 “We’ve enjoyed unprecedented success with the MS-RT Transit Custom, with the order books completely full since launch,” MS-RT Founding Director, Edward Davies, comments. “Our customers absolutely love their vans and the uniqueness of them, so we expect that the Connect will develop a similar following among those who want a commercial vehicle with genuine motorsport heritage.”

Take a look at the press release section below for more information.

A South Wales-based tuning company is to launch a new van to sit alongside its Ford QVM-approved Transit Custom Conversion.

MS-RT, which uses styling and technology pioneered by Ford’s works rally team, has revealed the first images, pricing and specification details of the new MS-RT Transit Connect, developed, designed and built in-house at its factory in Pontypool, South Wales.

The new model complements the MS-RT Transit Custom, introduced in 2018 to huge acclaim. The van features a styling kit designed and manufactured by the company at its Welsh factory. The conversion consists of a full MS-RT plastic injection-moulded body kit including a uniquely styled front bumper, grilles, front diffuser, side skirts, rear bumper, rear diffuser and spoiler.

In addition, it gets a quad stainless steel sports exhaust system, 18-inch OZ Racing alloy wheels, Michelin tyres, a carbon inlay sports steering wheel and a hand-made nappa leather and suede interior. Customers will also be given an exclusive MS-RT gift pack, consisting of a special logoed bag containing products to help keep their cherished van in tip-top condition. The conversion has been designed to pass QVM approval with Ford, which is already a key feature of the MS-RT Transit Custom.

For the van’s summer 2019 launch, MS-RT has also announced a limited run of 40 Launch Editions. Finished in Magnetic Grey, the Launch Edition will include upgraded alloy wheels as standard, along with a unique Launch Edition interior, sticker pack and ‘Limited Edition’ numbered plaque.

The Launch Edition vans will be built during the summer for delivery to the first 40 customers in September 2019, with standard production vans available for registration from October. MS-RT is offering the Launch Edition for the same price as the standard van.

All MS-RT Transit Connects will come with a three-year, 100,000-mile warranty. A long-wheelbase version will join the range in 2020.

All versions will come with LED loadspace lighting, a premium infotainment pack with nav and a reversing camera, bi-xenon headlights and twin side loading doors.

MS-RT Founding Director, Edward Davies, said: “We’ve enjoyed unprecedented success with the MS-RT Transit Custom, with the order books completely full since launch. Our customers absolutely love their vans and the uniqueness of them, so we expect that the Connect will develop a similar following among those who want a commercial vehicle with genuine motorsport heritage, fantastic sports styling and a full manufacturer-backed warranty. We can’t wait to deliver the first Launch Edition models later this year.”