2020 Toyota Supra Crashes At The Nurburgring 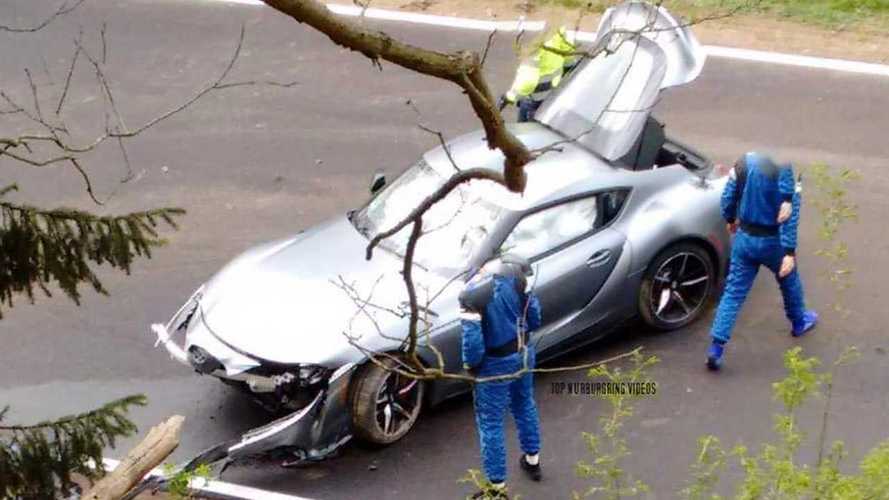 It didn't take long for someone to crash a Supra at the Green Hell.

It had to happen eventually, but we didn't expect to see this so soon because a 2020 Toyota Supra has already crashed at the Nürburgring. Don't worry, this wasn't a lucky person who somehow got ahold of a new Supra extremely early because this incident happened during the industry pool driving period, meaning someone with permission from Toyota was behind the wheel.

The crash happened at the Nordschleife's Exmühle section. The pod visible in some of the images is a way to conceal a damaged vehicle when hauling it away during the industry pool driving period. Automakers aren't keen on letting the public see their upcoming products, especially if the damage could potentially reveal secrets about a new machine.

Unfortunately, there are no other details about this crash. These photos only show damage to the Supra's front end, including having the front bumper torn away. The Exmühle section of the track includes a left-right complex of corners. The driver may have messed up the line through this area and understeered into the track barrier.

More Scoops On The Supra:

The public can't get behind the wheel of the 2020 Supra until this summer. Prices start at $50,920 (after the $930 destination fee) for the base model, and the Premium trim level goes for $53,990 by including standard features like a larger 8.8-inch infotainment screen with navigation, 12-speaker stereo, head-up display, and heated seats.

Regardless of trim level, the 2020 Supra has a 3.0-liter turbocharged inline-six engine that produces 335 horsepower (250 kilowatts) and an eight-speed automatic with an active rear differential. An adaptive suspension is also on the standard features list.