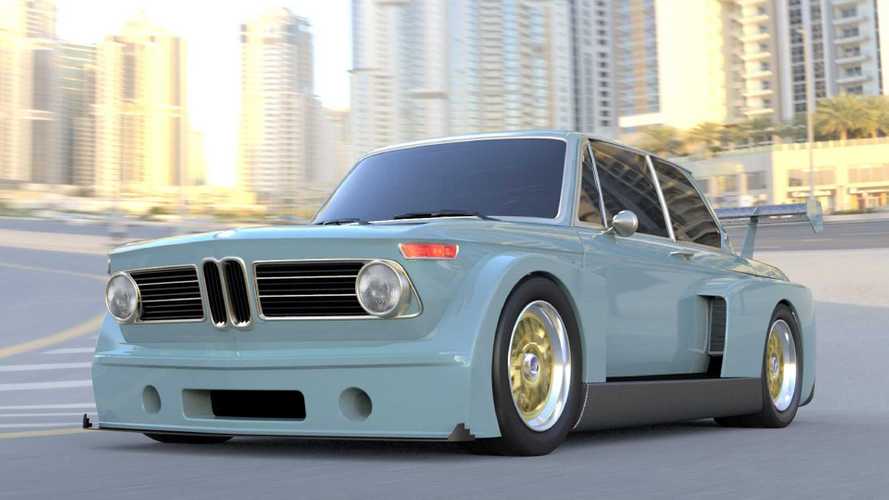 If you have a classic 2002, Gruppe5 will turn it into a monster.

Update: Gruppe5 wants to clarify its announcement regarding the engine for this proposed build. It's being built by BMWNA race engine builder Steve Dinan and his new company Carbahn Autoworks. Gruppe5 is not associated with Dinan Engineering; the company just work with its founder.

You don’t have to be a BMW fan to both know and appreciate the classic 2002 for the cool runabout and road racing star it was. In the world of performance motoring its a 1970s icon, and to this day it enjoys a strong following. Case-in-point is the team at Gruppe5 Motorsport, a company which currently seeks your classic 1968-1975 BMW 2002 so it may morph into a road-legal monster of epic proportions. It’s called the Gruppe5 2002, and if the stats we’re reading in the press release come to fruition, hold on to your hats and kidneys because this thing should go like hell in pretty much every direction.

Jay Leno Welcomes BMW 2002 With M3 Engine Into His Garage

The process begins with a donor car, which is completely disassembled and basically rebuilt from the ground up. A healthy infusion of steel and carbon fiber adds strength while reducing weight, and to make sure this street-legal GT car is still track compliant, proper equipment to comply with FIA safety protocol is part of the build. The exterior treatment clearly gives the plucky 2002 a hardcore widebody look, but that also allows larger rubber for better grip in the corners and under acceleration.

Speaking of which, that grip will be sorely needed because the original 2.0-liter four-cylinder is ditched for nothing less than a V10 sourced from the E60 BMW M5. It doesn’t stop there, because the engine is punched up to 5.8 liters and is said to generate no less than 744 horsepower (555 kilowatts).  If that’s not enough, a 5.9-liter option making 803 hp (599 kW) is also available. Mind you, this is powering a car that, according to Gruppe5, will only weigh 2,200 pounds. It’s also said to produce 2,400 pounds of downforce, so yeah, at speed it should seriously stick to corners – if you’re brave enough to roll onto the throttle.

This all sounds a bit too fantastic and frankly, we’d be waving the vaporware flag right now if it wasn’t for folks involved in this endeavor. Hardcore racers might recognize Riley Technologies as a constructor of Daytona Prototypes that were rather dominant in the Grand-Am Rolex Sports Car Series. Hardcore Bimmer enthusiasts will likely recognize Steve Dinan and his company CarBahn Autoworks, as he's been tuning fast BMWs for decades. You can probably guess which group will handle the chassis and suspension, and which will tweak the engine.

Pricing for the conversion isn’t mentioned, but we are told that only 300 cars will go under the knife. 200 will have to get by with the Dinan-tuned 744 hp engine, while 100 will brandish the 803-hp mill. We’re also told that Gruppe5 Motorsport is now accepting orders with plans to begin production this summer.