The truck broke during an unusual test involving 0-60 times while towing trailers.

The Fast Lane Truck gathered a trio of silver Ford F-150 4x4 pickups, each with a different engine, to compare performance at the dragstrip. To make things interesting, each truck will be towing an 8,600 pound trailer during its trip down the quarter mile.

The goal is to measure 0-60 times of each truck with the trailer attached, to give would-be happy campers an idea of the performance they can expect while merging with traffic onto the highway. After all, getting into an accident would be a particularly rotten way to start your vacation. 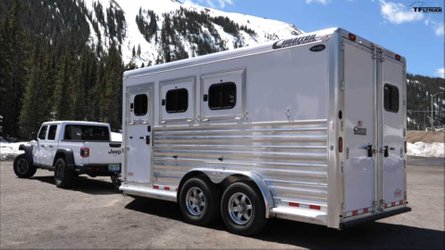 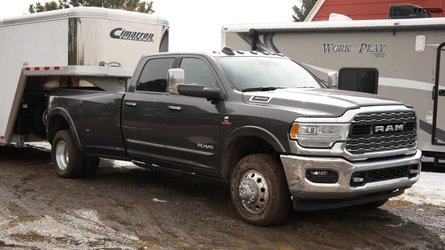 Another wrinkle added to the test is that each different engine was tested in its stock form, and tested again after a flash tune from 5 Star Tuning to optimize towing performance.

First up is the 5.0 liter, naturally-aspirated Coyote V8. In stock form, the truck takes 17.79 seconds to accelerate to 60 miles per hour.  While it's not as easy adding horsepower to a normally-aspirated engine with a tune alone, 5 Star Tuning found an additional 55 horsepower and 50 lb/ft of torque. The result is a drop to 15.88 seconds for the 0-60 run. That's nearly two seconds off!

Next up is the 2.7 liter EcoBoost V6. Incredibly, the boosted V6 blows the Coyote V8 out of the water in this test, managing to reach 60 miles per hour in just 15.54 seconds with the stock tune. With turbocharged engines being a bit more responsive to tuning, it's little surprise that 5 Star Tuning was able to add over 70 horsepower and 90 lb/ft of torque at the wheels on a 93 octane tune.

Keep in mind that the tune is designed for towing and not all-out performance. With peak torque available relatively early in the powerband, it should perform well. Unfortunately, the driveline of the F-150 could not handle the stress of the heavy trailer and the increased power, and the driveshaft U-joints failed at both ends.

The final truck in the test is a 3.5 liter EcoBoost V6 that has been fitted with a Banks Power cold air intake. In stock form , the 3.5 liter EcoBoost propels the F-150 tow rig to 60 miles per hour in 16.97 seconds. That's pretty respectable, especially compared to the stock Coyote-powered truck.

The 5 Star Tuning tune adds nearly 100 horsepower and around 165 lb/ft of torque. Those are incredible numbers, but one must keep in mind that those gains come much later in the powerband, at just under 6,000 RPM.

This time, the truck doesn't break, and it reaches 60 miles per hour in just 13.84 seconds. Personally, we're surprised at how well the smaller, turbocharged engines performed in this test compared to the Coyote V8. We'd just be careful about damaging our drivetrain if we chose to tune one.