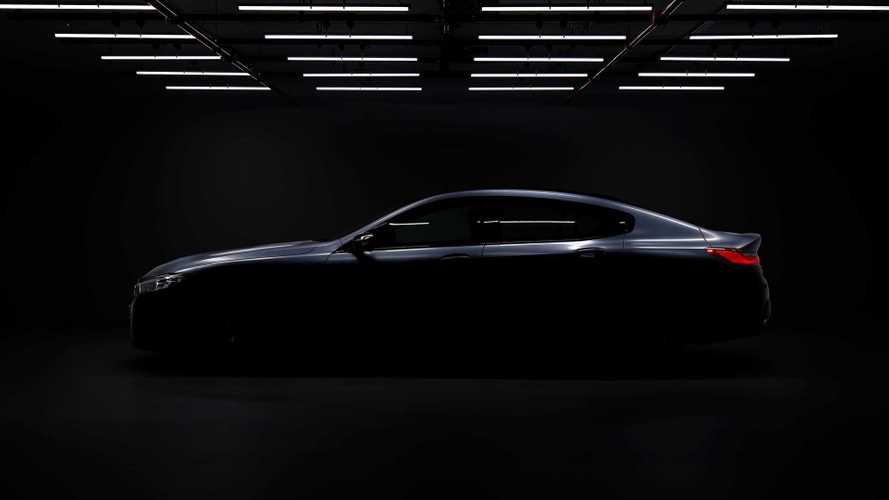 It's been a long time coming.

It’s been a few months since we last saw the BMW 8 Series Gran Coupe in spy photos. This time around, we’re not dealing with spy shots. The above teaser comes straight from BMW proper, suggesting an official reveal for the four-door could be coming soon. In fact, BMW then dropped a press release stating the wrap will come off during the automaker's NextGen event in Munich at the end of June.

We did a bit of photo enhancement to see if there’s anything hiding in the shadows, but BMW is wise to such things and even with the brightness blown out, we still see the same silhouette in the photo above. That’s okay; we’ve caught many spy photos of the forthcoming big Bimmer over the last year or so, and though camouflage obscures some of the details, we have an overall idea how it will look.

From the A-pillar forward it’s pure 8 Series coupe as we know it today. Beyond there, the roof is elongated a bit but despite hosting two extra doors, the coupe’s overall sleek shape is well preserved. The rear quarter panels are unique to the Gran Coupe, but surprisingly the rear fascia looks pretty much identical to the two-door despite the interior differences.

Interior wise, the Gran Coupe should offer a familiar posh layout with plenty of kit for driver and passengers to enjoy. At launch, power will come from the established 4.4-liter twin-turbo V8 making 523 horsepower (390 kilowatts), though the diesel will probably be offered in Euro markets as well. We’ve also seen the hopped-up M variant making the rounds, likely packing a mill with over 600 hp (447 kW) similar to the insanely quick BMW M5. That car, however, is still likely a year away.

BMW's NextGen event will take place at BMW Welt in Munich from June 25 - 27, with sales scheduled to begin in September.

BMW’s model offensive in the luxury segment continues with the addition of a third model variant to the 8 Series range; World premiere at the BMW Group #NextGen event in Munich in June 2019; Launch from September 2019.

Munich. The BMW Group is revealing another new addition to the BMW 8 Series range as it presses ahead with its model offensive in the luxury segment. Following the successful launch of the BMW 8 Series Coupe and BMW 8 Series Convertible, the carmaker is now offering the first glimpse of the new BMW 8 Series Gran Coupe. This four-door sports car of consummate elegance, with an interior epitomising modern luxury, is currently in the final phase of development for series production. The BMW Group #NextGen event set to be held at BMW Welt in Munich on 25 – 27 June 2019 will provide the stage for the newcomer’s world premiere.

The new BMW 8 Series Gran Coupe fuses breathtaking performance credentials with an emotion-stirring design and spacious rear compartment. Its standalone character is brought to the fore most prominently by a design as graceful as it is flamboyant. Athletic proportions and dynamically flowing lines come together to create an aura of sporting exclusivity. The two extra doors and impressive space for rear passengers combine with the extended wheelbase and duly enhanced ride comfort to make the new BMW 8 Series Gran Coupe an outstanding operator both in everyday driving and over longer journeys.

Expanding its model portfolio in the luxury segment is one of the key fields of action the BMW Group has identified – as part of its NUMBER ONE > NEXT strategy – to ensure the company’s sustained growth. The new BMW 8 Series Gran Coupe’s broad range of abilities give it everything it needs to stoke the appetite of new target groups for BMW’s signature driving pleasure in a luxury model. The car’s world premiere will be one of the highlights of the inaugural BMW Group #NextGen event in Munich. The worldwide launch of the new BMW 8 Series Gran Coupe will begin just a few months later, in September 2019.