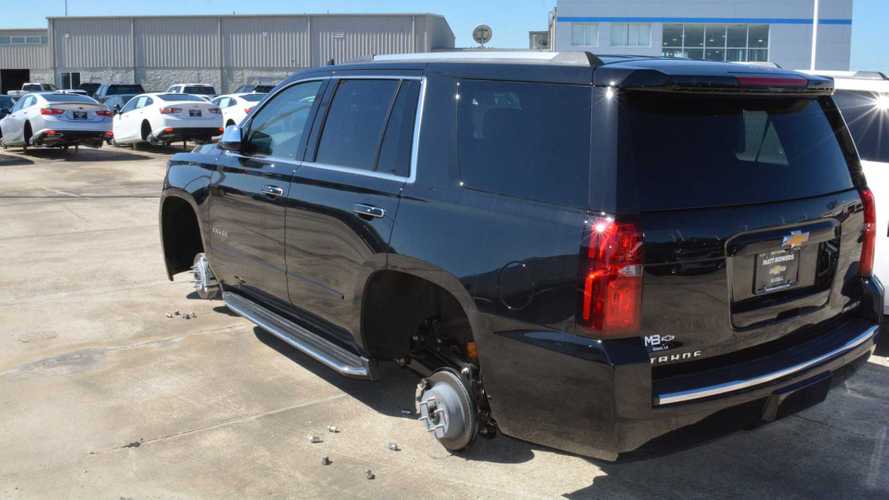 The value is estimated at $120,000 and cops think it was a professional job.

Imagine going out to your car in the morning only to find someone had stolen your wheels. That’s what happened at a Chevrolet dealership in Slidell, Louisana on Saturday, April 27, only the perps didn’t snag wheels from just one car. All total, the daring thieves stripped 31 vehicles, which basic math tells us is 124 wheels and tires all total. Additional math suggests the value of these stolen items exceeds $120,000.

WGNO in New Orleans reports that a manager at Matt Bowers Chevrolet arrived at the dealership Saturday morning and soon discovered numerous vehicles missing wheels. Images shared by the Slidell Police Department on Facebook show the aftermath, ranging from a slew of Chevrolet Malibus on jack stands to Tahoes and Suburbans sitting flat on the ground.

If snagging 31 sets of wheels in the middle of the night sounds like a monumental task, you’re not wrong. According to the report, Slidell Police Chief Randy Fandal believes this heist was pulled by a group of professionals who knew exactly where and how to get the goods without attracting attention. Surveillance video shows a couple of individuals crossing the lot just before 3:00 A.M. Saturday morning, followed shortly by a U-Haul truck entering the rear parking area. Apparently, the two suspects were cutting locks so the truck could get in, and roughly 40 minutes later, the truck was seen on camera leaving the area.

It appears neither the removal of the wheels nor the loading was caught on camera. Police say the crew defeated all kinds of on-site security measures including alarms, video, and they also doused lights in the lot so they wouldn’t be seen. Similar thefts have been reported in Texas and Oklahoma, suggesting this wasn’t a local job. Still, police can’t rule anything out just yet.

As for the dealership, a $25,000 reward is available to the person who provides information leading to arrest. The dealership pledges to pay half that amount upon an arrest, and the rest upon conviction.