Acceleration, braking, cornering, and drifting – which car is faster?

Last May, while tweeting about the specs of the Tesla Model 3 Performance, Elon Musk claimed that it would accelerate faster than a BMW M3 – and handle better, too. Top Gear Magazine's executive editor, Jack Rix, got his hands on both for a comprehensive track test.

The first test, a standard quarter mile drag race, went to the Tesla. The Tesla finished the quarter mile in 11.9 seconds, with a trap speed of 112.6 miles per hour. The BMW, on the other hand, crossed the line in 12.6 seconds at 119.1 miles per hour. 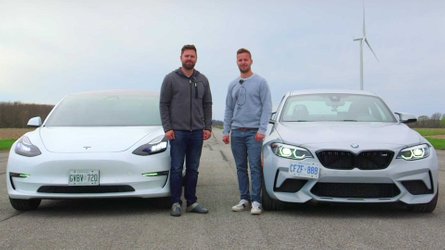 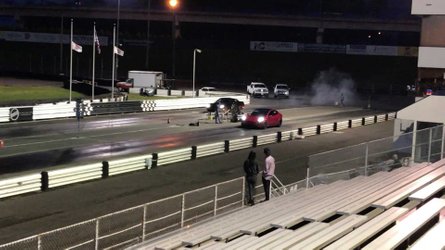 It's clear from the BMW's higher trap speed that the prodigious torque of the electric Tesla helped it with quicker acceleration off the line. A half-mile drag race may have held a different result.

Similarly, the Tesla also won the 0-100-0 contest, a test which is thought of by many to be a more comprehensive metric of a car's performance. The Tesla completed the test in just 13.1 seconds, with the BMW over half a second behind, at 13.8 seconds.

Next up were hot laps. Many might be inclined to think that the BMW would out-handle the Tesla and prevail, but such was not the case. While the BMW seemed more composed, Rix praised the Tesla's re-tuned regenerative braking system, which generated lift-off oversteer reminiscent of the best front wheel drive hot hatches of the '80s.

The final competition was a drift competition, which was won by the BMW. Rix states that, while the Tesla is faster, it's not nearly as much fun to drive as the M3. While the Tesla may have felt cold, nimble, and a bit heavy, it still proved that electric cars have come a long way in a very short time.