Dodge Demon Pair For Sale Is Your Ticket To 1,680 HP [UPDATE] 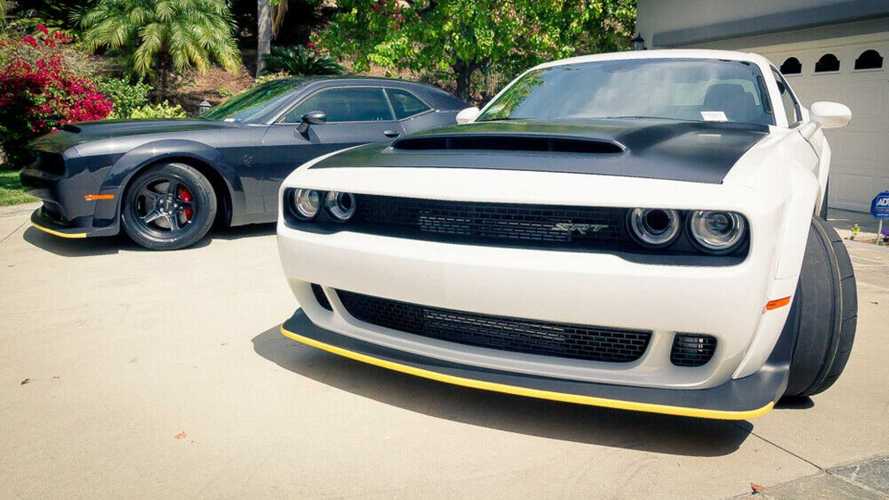 The only thing better than a Demon? Two of them.

[UPDATE, May 1] The listing has expired, with the highest bid after a total of 41 bids being $249,951. The seller has contacted us to reveal the reserve price was $275,000, so the cars failed to sell. The good news is these have been listed once again on eBay, this time individually. The Demon finished in White Knuckle can be found here with a "Buy It Now" price of $125,000, while the rarer Maximum Steel is listed here for $150,000.

With production capped at 3,000 units for the United States and 300 for Canada, the Dodge Challenger SRT Demon is one of the most exclusive muscle cars in recent times. If you missed out on buying the 840-horsepower drag strip king and you’d like to park two of them in your garage, now is your chance. An interesting eBay listing set to end in fewer than 24 hours shows a pair of Demons – one finished in White Knuckle and the other in Maximum Steel.

Aside from the different body and interior colors, the two Demons feature just about the same options, but the Maximum Steel example was a bit more expensive due to the red seatbelts and the Demon logo on the leather seats. The cars have just about every option you could think of, including the black satin hood (an extra $1,995), sunroof ($4,995), and the Demon Crate ($1).

According to the listing, the cars are in “brand new condition” and with only six miles on the clock, which we assume are the delivery miles. We’re looking at the #1323 and #1327 of the 3,300 units. As you probably know by now, the serial numbers for the entire production run didn’t end with #3,300 since some vehicles were damaged and scrapped and Dodge had to replace them, thus the final Demon built had a serial number of 3,314.

At the moment of writing, there are fewer than 17 hours left to bid on the Demon pair, and the reserve has not been met. We will update the article once the listing comes to an end.

The Demon Is One Hell Of A Muscle Car: