We’ve really come to enjoy the top speed runs from Johnny Bohmer Proving Grounds on YouTube. For those not aware, this company utilizes the runway formerly used by the Space Shuttle on Merritt Island in Florida. The runway itself is the longest of its kind in the U.S. at 3.2 miles, and the top speed runs utilize 2.7 miles of that for full-on acceleration. That leaves just a half-mile for shut down, and though it sounds like a lot, when you’re trying to pull up from 200 mph, that distance can disappear mighty quick.

Feel The Need For Speed: 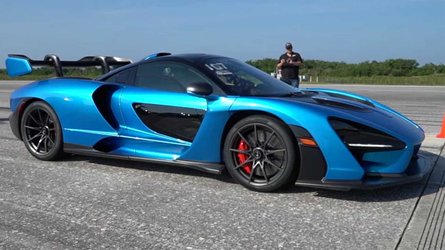 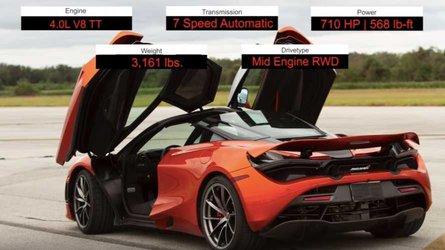 It goes even quicker when the car is a 2017 Ford GT. Johnny Bohmer Proving Grounds just posted the above top-speed run, and though we saw a new Ford GT in this very location back in February, this time around the speeds are just a bit higher. Ford says the GT will top out at a drag-limited 216 mph; in February we saw a stock GT manage 210 mph before running out of runway, but the speedo was still climbing slowly at the end of the run.

This latest effort brings us another bone stock GT, which produces 647 horsepower (482 kilowatts) from its mid-mounted twin-turbo V6. We don’t know what the atmospheric conditions were like with the run in February, but this time around the winds were light with temperatures in the 70-degree range and humidity between 60 and 70 percent. And of course, a benefit to running at the Space Shuttle landing strip – aside from a freaking Space Shuttle being on display at the runway – is the altitude being just above sea level for maximum air density. In other words, conditions were very good for this top-speed run.

This white Ford GT also executes a more aggressive launch compared to the previous car, hitting 100 mph in just 7 seconds and 150 mph in 14 seconds. As before, the acceleration slows after 180 mph but continues a steady climb past 200. Whether the atmospheric conditions were a bit better or the harder acceleration gave this GT more room to run is unknown, but we do know it easily reaches 213 mph before the shutdown zone.

That’s just 3 mph shy of its official top speed, and given just a bit more room to run, it might be able to get there.