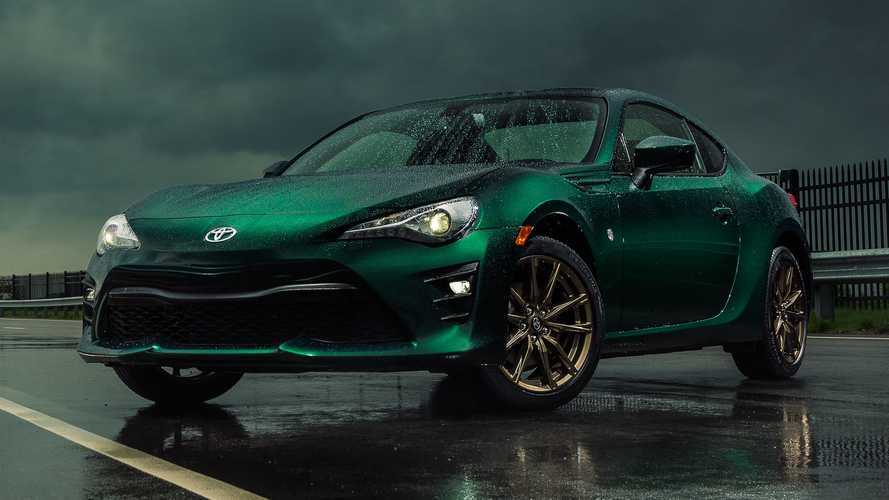 Upon initial Googling, you'll find Hakone is a mountainous town known for breathtaking views of Mount Fuji and a world-renowned hot springs resort. But the Toyota 86 Hakone Edition isn't named for the town's famous hot springs – though, it is hot in its own right. Instead, this 86 borrows its namesake from the Hakone Turnpike, a stretch of highway two hours southwest of Tokyo known as one of the best driving roads in the world.

In honor of the iconic snaking pavement, the America-bound special 86 wears upgrades like a custom Hakone Green paint job, 17-inch "twisted" spoke bronze wheels, and a subtle yet stylish black lip spoiler. But it also carries over all the 86's standard exterior treatments, things like LED headlights and fog lamps, chrome exhaust tips, and power mirrors, among others.

If it all looks a bit familiar, that's because it is. The distinctive 86 is virtually the same Japan-only special edition released in February. Only, it's called the "British Racing Green Limited" edition 86 in Toyota's home country of Japan, and "Hakone Edition" 86 here in the States. Confusing.

Upgrades inside include trim-exclusive tan and black Alcantara seats, tan stitching on the armrests, steering wheel, gear shift lever, and emergency brake, and a tan Toyota 86 logo embroidered on the passenger side dash. Even the trunk gets different carpeting with an embossed 86 logo and the key fobs get custom tan gloves. Again, the base 86's interior features like heated seats and cruise control carry over to the Hakone Edition.

Toyota Strongly Hints New 86 Will Be Co-Developed With Subaru

The Toyota 86 Hakone Edition goes on sale this fall. No word on pricing or availability yet.

Two hours southwest of Tokyo lies one of the great driving roads in the world, the Hakone Turnpike. This famous stretch of road is on the top of many bucket lists, and Toyota is paying tribute to this iconic spot, as well as other international sports car driving, with the 86 Hakone Edition.

The 86 Hakone Edition will feature Hakone green paint on the exterior that is complemented with 17” twisted spoke bronze wheels and a black spoiler.

The interior features several unique elements including tan and black Alcantara seats and a black sliding armrest with tan trim and black stitching. A tan Toyota 86 logo is embroidered on the passenger-side dashboard, while the steering wheel, parking brake cover and shift boot all get tan stitching. The door trim, knee pad and meter visor will get black stitching. It will also feature a unique premium trunk carpet with an embossed 86 logo.

Everyone that purchases an 86 Hakone Edition will receive a pair of tan key gloves and folio cover with a debossed 86 logo and black stitching.

The 86 Hakone Edition is based off the 86 GT grade and will be available for model year 2020. It will have a choice of six-speed manual or automatic transmission and be powered by a 2.0- liter horizontally opposed aluminum boxer four-cylinder engine, fed by Toyota’s D-4S Dual Injection System, delivering 205 hp and 156 lb.-ft. (200 hp and 151 lb.-ft. of torque with the six- speed automatic).