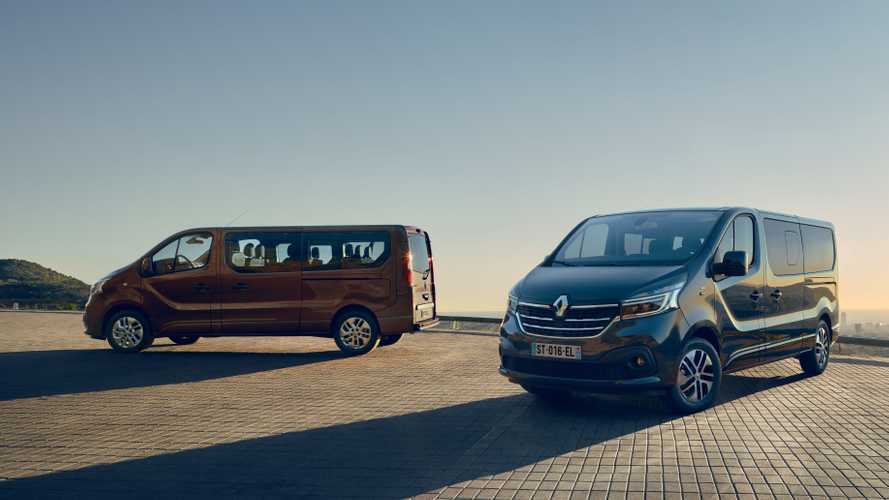 Renault has simultaneously revealed new versions of its popular Master and Trafic vans, as well as a new electric concept van that previews the new Kangoo.

The flagship Master model has been facelifted with a new front-end design featuring the C-shaped light signature borrowed from the Renault car range, plus a new, taller grille. Inside, meanwhile, the new dash gets chrome trim for a higher-quality finish, better-quality upholstery and full integration of the infotainment screen.

Under the skin, however, the changes are arguably more pronounced. There's a rear-view camera system and a crosswind system that helps the driver correct any change of direction caused by the air hitting the vehicle’s side panels. Activated at speeds of over 43 mph (70 kph), the system is said to provide up to half the steering force required in "extreme" conditions.

Other driver assistance systems include the front parking sensors, a sensor that detects vehicles in the blind spot over the driver’s shoulders, and autonomous emergency braking, which works at highway and urban speeds to prevent or mitigate impending accidents if the driver has not noticed the danger.

Under the hood, the new van will benefit from a new range of 2.3-liter diesel engines available with a choice of power outputs and gearboxes. Customers can choose between six-speed manual and automatic transmissions, with engine power outputs of up to 178 hp. And for those operating in cities, Renault will also offer an electric version of the Master, which boasts a 75-mile (121-km) range and is intended for so-called "last-mile" deliveries.

The smaller Trafic, meanwhile, has also undergone a little nip-and-tuck surgery. Like the Master, it has inherited the C-shaped light signature and gained a new grille, while the cabin has been refreshed with satin chrome buttons and new upholstery. And like the Master, there are changes in the engine bay, where the 2-liter diesel powerplants have been updated and can now be specified alongside a new six-speed automatic gearbox.

Unlike the Master, though, there will be passenger-carrying versions of the Trafic aimed at large families or minicab firms. The SpaceClass version will be the luxurious option with leather seats and diamond-finish alloys, while the Trafic Passenger will be the more utilitarian, practical option.

Even further down the range, however, is the new Kangoo ZE Concept. Said to preview the next-generation electric Kangoo van, the design study uses more rounded lines to mimic the company’s passenger cars, while green touches are designed to show the vehicle’s place in the "work" section of Renault’s offering.

“2018 was the best year ever for the light commercial vehicle business in terms of sales, with 34 percent growth compared to the previous year,” said Denis Le Vot, senior vice-president at the Renault-Nissan LCV Business Unit. “In 2019, we will continue the renewal of our line-up to meet the expectations of our customers. Thanks to Renault Pro+ development and our connected services offer, we will keep on developing accurate and innovative solutions to support our professional clients' business development.”