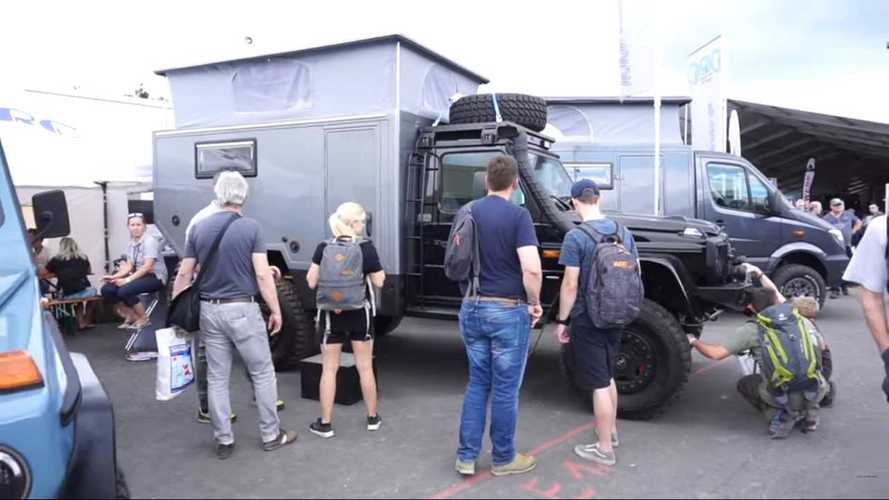 My what impressive ground clearance you have.

We don’t often see the rough-and-tumble Mercedes-Benz G-Class converted to camper duty, but across the pond it’s a fairly popular upfit. That holds especially true for the more adventurous overlander segment, where creating your own path to truly remote areas is part of the fun. Such vehicles require serious off-road chops, and that’s where this custom G-Class built by Off Road Center (ORC) in Germany comes in. YouTuber Alan Heath caught up to the latest project at a recent 4x4 RV show not too far from Frankfurt and swooped in for a closer look.

The Few, The Proud:

Hammock Time: Roof Is Coolest Part Of This Rugged RV
⠀

Unfortunately we’re not given much information on the mechanical aspect of this project. ORC calls it an exclusive build; the company offers many such off-road campers based on the lovable G-Class though this one is a bit more tweaked for RV duties than most. It’s obviously lifted and fitted with aggressive off-road rubber, and should you really get into trouble crawling through the countryside, there’s a beefy winch.

Rather than work with the standard G-Class accommodations, everything behind the front seats is yanked out and replaced with a cozy camping module, accessible through a fairly narrow side door. Inside, the raised-roof living area provides plenty of room to stand while also adding a bit more sleeping space with a drop-down bed. At the back, the dining area converts to a second bed, while a nifty pull-out stove and sink offer a compact kitchen for cooking. Across from that is a refrigerator with extra storage space around it; for that matter, storage abounds in the sparse-yet-functional camper, and unlike many such module conversions, there’s still a pass-through the front cockpit area.

A quick visit to ORC’s website reveals all kinds of custom builds similar to this imposing G-Class. Pricing is obviously dependent on exactly what you want in a tough overlander, but we suspect the black monster featured here doesn’t come cheap.