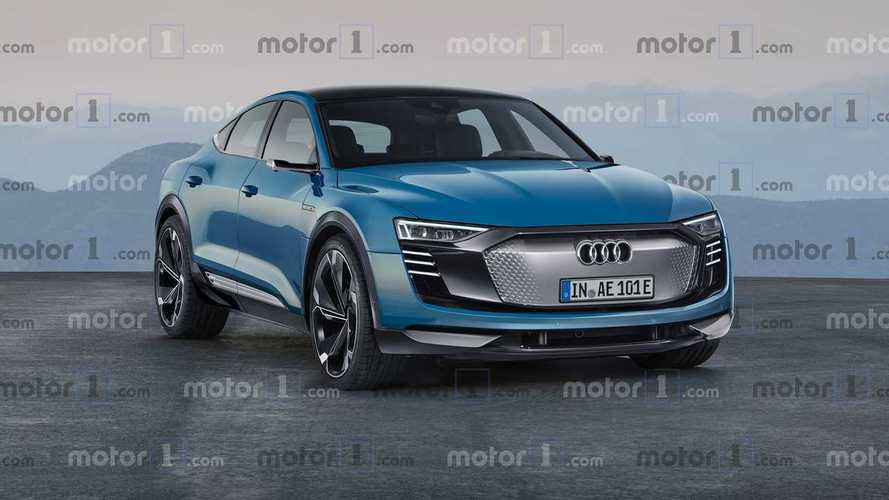 The Sportback gives the crossover a sleeker rear while retaining the rest of the E-Tron's strengths.

Audi has a production version of its E-Tron Sportback concept on the way later this year, and it'll broaden the brand's lineup of EVs. With test mules already under development on the road, this rendering imagines how the electric crossover might look.

The E-Tron Sportback's look starts with the existing crossover, and the designers sculpt the rear section of the roof to give the vehicle a sleeker silhouette. This limits headroom for folks in the second row and decreases cargo room but gives the exterior a more flowing shape.

The Sportback would likely be mechanically identical to the existing E-Tron. It offers an electric motor at the front and rear that produce a maximum of 402 horsepower (300 kilowatts) in S mode or 355 hp (265 kW) in the normal D mode. There's a 95-kilowatt-hour battery pack that only provides a 204-mile EPA range rating for the existing model. The SUV can reach 60 miles per hour (96 kilometers per hour) in 5.7 seconds, and there's an electronically limited top speed of 124 mph (200 kph).

In concept form, the E-Tron Sportback made 430 hp (320 kW) during normal driving or 496 hp (370 kW) from the boost mode. Rumors suggest that Audi has a more powerful electric drivetrain under development, so it's possible the more potent variants could join the lineup relatively soon.

On the inside, the E-Tron Sportback should also be similar to the existing model (above). It offers a pair of touchscreens on the center stack – one for the center stack and another for the HVAC system.

After the E-Tron Sportback joins the lineup, a five-door grand tourer EV should arrive. There are rumors of an electric supercar coming eventually, too.