Nissan GT-R Hill Climber Has Plenty Of Wing, 1,600 HP At The Wheels 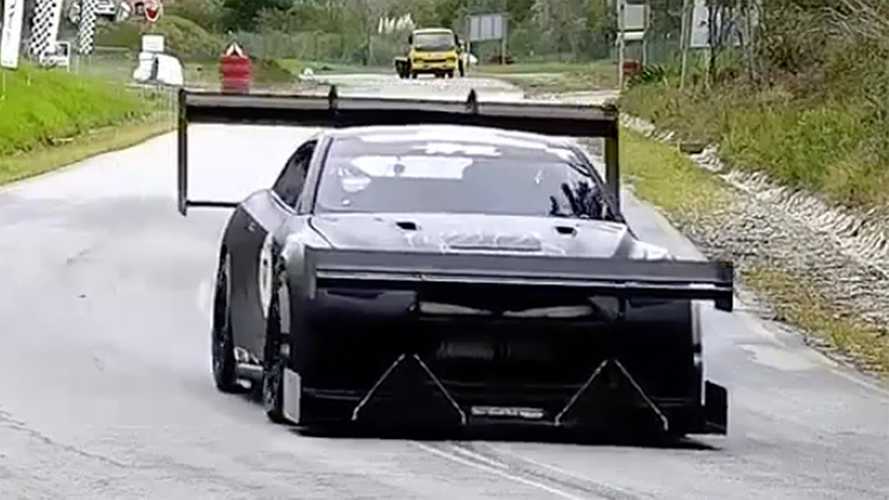 The wings can make more downforce than the car weighs.

Update: Good news! Our partners at Motorsport.tv will have live coverage of the Jaguar Simola Hillclimb. Classic cars will run the course on Friday, May 3. You'll see this wild GT-R competing on Saturday and Sunday.

The shot above comes from the event on Saturday. There's another chance to watch it on Sunday, here.

Hill climb racing breeds absolutely insane machines with an emphasis on acceleration and downforce through the tight courses. For a perfect example of these crazy creations, take a look at Franco Scribante Racing's heavily prepared Nissan GT-R that's about to compete at the Jaguar Simola Hillclimb in South Africa.

This beast wears a gargantuan wing on the front end and a similarly massive splitter below it. At the back there's another massive aerofoil and a huge diffuser underneath the vehicle. At high speeds, these colossal aerodynamic devices reportedly make more downforce than the vehicle weighs, so sticking to the road shouldn't be a problem. While the rest of the exterior looks like a GT-R, all of the panels are now carbon fiber for saving weight.

The team doesn't want to discuss too much about the powertrain, but the crew members drop some tantalizing tidbits in the video below. The engine is allegedly good for 2,200 horsepower (1,641 kilowatts). However, the crew detunes it to produce a mere 1,600 hp (1,193 kW) at the wheels, which seems like plenty. For managing the output, there are two computers that are able to dial back the torque for maximizing traction on the road.

The interior has the sort of purposeful surroundings you'd expect from a race car, including a heavily bolstered, fixed seat and digital instruments. There's technically a passenger seat, but the person sitting there would need to wrap their legs around the tank for the dry sump oil system.

The team received the car only three weeks before Jaguar Simola Hillclimb, and the crew have been working hard to tune the machine for the race. The event runs from May 2 to 5 and should provide an amazing opportunity to hear what this crazy machine sounds like.

For a little more info, check out the video below that includes an overview of the GT-R and interviews with the principal members of the team.