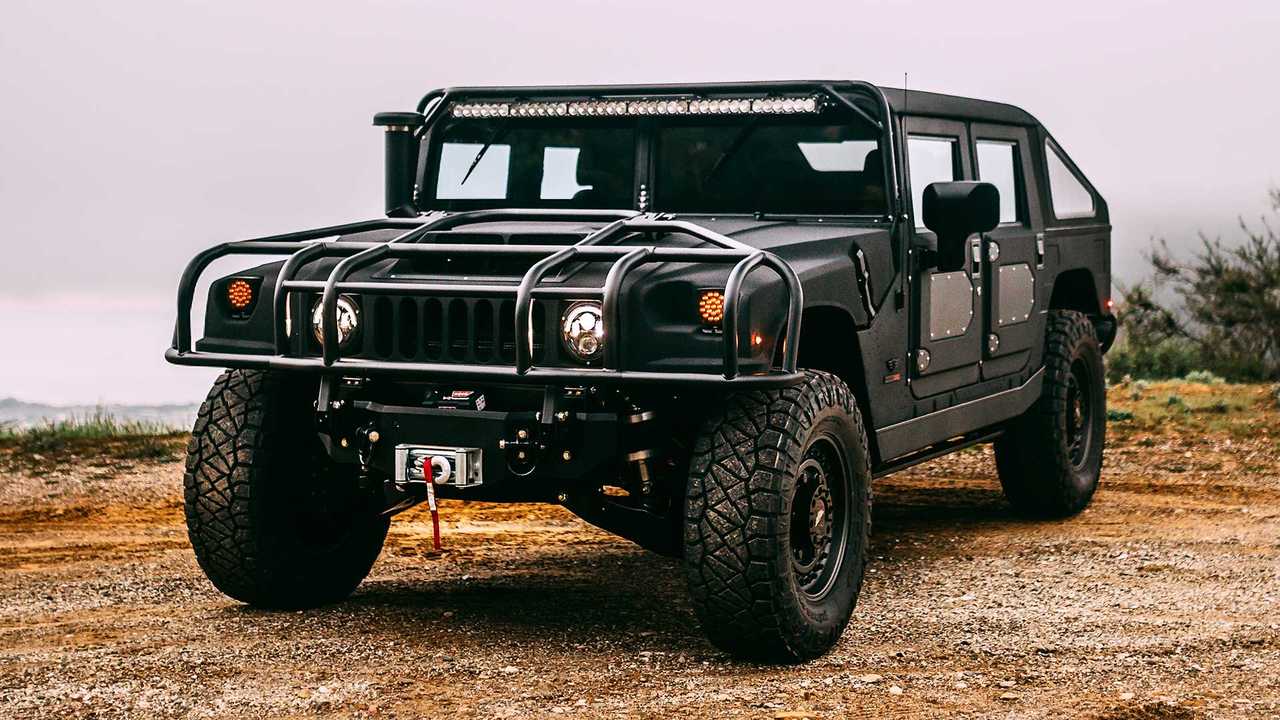 This mean, restomodded SUV combines style, utility, and performance into a single package.

Mil-Spec Automotive continues to create impressively restomodded Hummer H1s, and the firm's newly completed sixth example now shows off its dark aesthetic. The vehicle is part of Mil-Spec's Launch Edition lineup of building 12 customized Hummers from 2018 to 2020. This one cost the buyer $295,039.

Is Hummer Coming Back?

Like Mil-Spec's other creations, the team replaces the original floorpan with a more rigid aluminum piece. All of the body panels are now aerospace-grade aluminum, too. The new Hummer rides on an eight-way adjustable air suspension that offers four inches of ride-height tweaks from within the cabin.

To match the mean look, there's a 6.6-liter Duramax turbodiesel that makes 500 horsepower (373 kilowatts) and 1,000 pound-feet (1,356 Newton-meters) of torque. The power runs through a six-speed automatic gearbox with strengthening to take the ample output. A two-speed transfer case and ARB air locker on the rear axle means this rig should be able to crawl through just about anything. A set of Wilwood brakes with 12.25-inch slotted/drilled rotors help slow down the big rig.

Mil-Spec's Baja Beast Hummer Is Ready To Roll Over Everything

The buyer of Mil-Spec's sixth creation (gallery above) wanted something akin to the firm's second build (gallery below). Both of them feature a fastback rear, but the designer's goal for the latest one is to create a more utilitarian look. This one features a functional hood scoop and aluminum snorkel intake. A massive tubular bumper protects the front bodywork. A 60-inch LED lightbar spans the upper section of the windshield. It rides on 20-inch Black Rhino Armory wheels with 38-inch Nitto Ridge Grappler tires.

On the inside, Mil-Spec's sixth creation is very black in a mix of leather and Tough Duck marine-grade canvas. The Paracord door handles are an especially cool touch. There's a vinyl-covered floor, so don't worry about your muddy boots ruining anything. The company also adds extra sound deadening and a padded headliner for keeping the cabin much quieter than a normal Hummer. Since there's so much room on the insider, there are separate air conditioning systems for the front and rear seats.

“Six really is the culmination of everything our company has learned over the past four years restoring both the military and civilian model Hummers down to the smallest detail,” comments Mil-Spec Automotive CEO Adam Mitchell. “These trucks offer so much potential and really are amazing platforms for a company like ours to come in and re-engineer as well as redesign them as bespoke builds for enthusiasts looking for something completely different.”

A 1996 4-door slant-back H1 served as the donor vehicle. As with every Mil-Spec Automotive build, the vehicle is completely disassembled and rebuilt to mint condition. The job involves replacing the factory seam-sealed floorpan with a fully welded aluminum unit. The in-depth process also actually shaves some vehicle weight while significantly adding rigidity and dampening overall road noise. Mil-Spec Automotive also fabricates any necessary replacement body panels out of aerospace-grade aluminum. This includes door skins as needed.

The most unique aspect of #006 is its adjustable suspension system. The #002 Slant-Back also had the optional Mil-Spec Air-Ride suspension, but a more refined self-leveling execution was used for the new #006. This system adds about four inches of ride-height adjustment to increase off-road ground clearance when needed via RideTech airbags at each corner. Accuair pneumatics and switches control the airbags for in-cab height adjustability; the self-leveling feature compensates for the added weight of rear-seat passengers and/or cargo. Unsprung weight is controlled to taste via 8-way-adjustable shocks.

Like its predecessor #002, the new slant-back’s exterior is finished in Deep Sky Black textured spray-on polyurethane material, which is infused with Kevlar to help fend off brush and shopping-cart scratches. Black semi-gloss trim accents give a murdered-out effect but with subtle contrast. Other exterior options include the functional Mil-Spec hood scoop that decreases underhood temperatures, heavy-duty bumpers with a front Warn 12,000-pound winch, an all-aluminum offset snorkel, and a windshield-mounted 60-inch Baja Designs OnX6 LED lightbar.

The new Mil-Spec Automotive H1 #006 is part of the company’s inaugural Launch Edition line. Limited to 12 bespoke vehicles created between 2018-2020, all Launch Edition H1 feature significantly upgraded powertrains. Instead of using the original 6.2L GM diesel found in most H1, Mil-Spec Automotive uses the LBZ version of the 6.6L Duramax engine found in the final-production-year 2006 “Alpha” Hummers. Each engine is rebuilt and assembled in-house to produce 500 horsepower and 1,000 lb-ft of torque. This is a significant improvement over the original specs: 360 hp/650 lb-ft.

Gear reduction comes from an Allison 6-speed automatic transmissions that is prepped by MSA to handle the extra Duramax power. To maximize reliability, Mil-Spec replaces the factory all-wheel drive system with a late-model GM HD truck system: the part-time New Venture Gear 242 2-speed transfer case so that the front axleshafts aren’t being driven when the vehicle has traction on pavement. To reduce noise/vibration/harshness (NVH), Mil-Spec engineered the motormounts and transmission crossmember to optimize drivetrain angles and add rigidity. Prior to assembly, Mil-Spec powdercoats the frame to combat corrosion.

For #006, Mil-Spec also upgraded the 29-spline axleshafts and 1.92:1 portal gear-reduction units to the military Humvee 12,000 GVWR versions. To maximize traction without adversely compromising steering, a selectable ARB Air Locker was added to the rear axle. Also, brakes are upgraded to Wilwood 12.25-inch slotted/drilled rotors downstream from a Hydratech  hydroboost unit that uses the power-steering pump to add pressure to the braking system.

Tires are 38x13.50R20 Nitto Ridge Grapplers on 20x9.5 Black Rhino Armory military-look beadlock wheels in Matte Gunblack for a mature and function-focused look. Some customers like the factory Hummer wheels with central tire-inflation system (CTIS), but Mil-Spec Automotive feels that this system is more leak-prone. Instead, most customers work with Mil-Spec to choose aftermarket wheels. For dependable inflation, Mil-Spec Automotive adds an on-board compressor to supply inflation and service air. A quick-disconnect air fitting is mounted on the rear bumper, and a tire-inflation hose is included inside the cab, stored in the rear console.

Mil-Spec Automotive’s in-house designers also work with clients to completely personalize interiors. The overall scheme on #006 is a function-forward two-tone black leather with black Tough Duck marine-grade canvas accents to match the truck’s triple-black theme. Instead of carpeting, Mil-Spec chose an all-weather vinyl fabric for optimal durability. This covers the polyurethane-coated body tub. Sound-deadening material is also added generously to help overcome the H1’s rattly DNA. Acoustic control extends to the padded headliner, which runs the length of the vehicle, through the Slant-Back hardtop.

The rest of the interior retains only the original front-seat brackets. The instrument panel and gauges were designed in-house by Mil-Spec. Features include an altitude reading, GPS speed, and performance-capturing for top speed, 0-60 mph, and quarter-mile times. A MOMO Prototipo steering wheel is covered in upholstery-complementary leather.