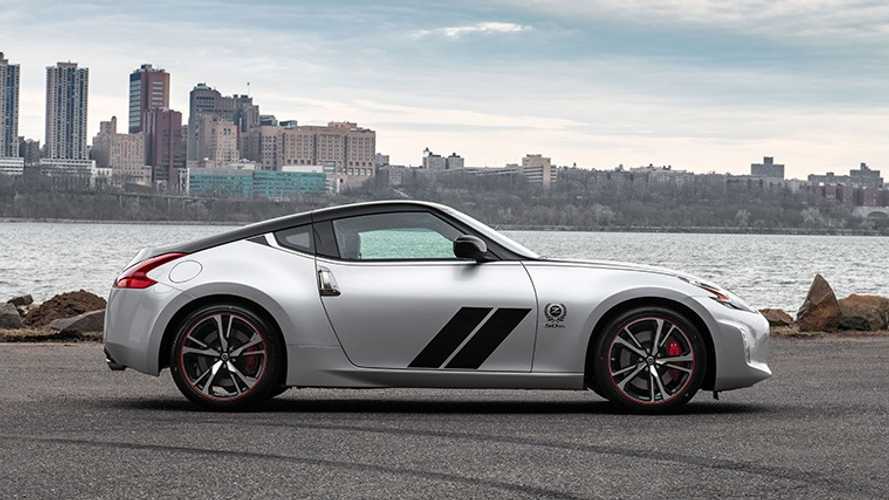 The retro-flavored appearance package will add $2,600 to the price of a new 370Z.

Last week, at the New York International Auto Show, Nissan announced a pair of special anniversary models to commemorate the 50th anniversary of both the Z car and the GT-R.

The original 240Z debuted at the New York International Auto Show in 1969, and laid the groundwork for Nissan's success in the United States market. While many Americans had an aversion to imports at the time, the 240Z's supermodel good looks, solid performance, and great value won over the hearts and minds of many.

While the 370Z is a bit long in the tooth, it's still a great sports car. As we said on last week's Motor1 Podcast, the problem with Nissan's US pricing strategy is that, while incentives and discounts make many cars – including the 370Z – tremendous values, their MSRPs make them seem overpriced.

Since auto writers have to judge all cars based on their MSRP, the Nissans always seem to end up drawing the short straw in comparison tests. However, don't let that discourage you from checking out a new 370Z.

The 50th Anniversary appearance package features stripes and colors evocative of the BRE Datsun SCCA race cars. The racing success of those cars helped Nissan (then sold as Datsun in the US) make a name for themselves as a high-performance powerhouse capable of hanging with the best cars Europe had to offer.

It's not an exaggeration to say that the BRE race cars played a part in the success of all Japanese cars in the US, not just Nissans. Combined with the recent news that they would be producing restoration parts for the R32 Skyline, it's clear that Nissan is a company that cares about their heritage.

NASHVILLE, Tenn. – Nissan today announced U.S. pricing for the 2020 370Z Coupe and 370Z NISMO, which are on sale now at Nissan dealers nationwide. The starting Manufacturer's Suggested Retail Prices (MSRPs)1 for the 370Z Coupe and the high-performance 370Z NISMO start at $30,090 and $45,790 respectively.

The big news for 2020 is the addition of a new 370Z 50th Anniversary Edition package, which celebrates five decades of sports car passion. The revolutionary 1970 Datsun 240Z made its U.S. debut at the 1969 New York Auto Show. The now iconic two-door coupe was, for the era, both stylish and powerful. Best of all, it was affordable compared to other sports cars on the market.

The 2020 370Z 50th Anniversary Edition is offered exclusively on the 370Z Coupe Sport grade and is available with both the 6-speed manual and 7-speed automatic transmissions. Its unique appearance pays tribute to the renowned Brock Racing Enterprises (BRE) livery that adorned the famous BRE Datsun racers of the late 1960s and early 1970s – in a choice of two exterior two-tone color options: White/Red or Silver/Black with bold door stripes.

Complete details on all 2020 370Z models are available at NissanNews.com.

About Nissan North America
In North America, Nissan's operations include automotive styling, engineering, consumer and corporate financing, sales and marketing, distribution and manufacturing. Nissan is dedicated to improving the environment under the Nissan Green Program and has been recognized annually by the U.S. Environmental Protection Agency as an ENERGY STAR® Partner of the Year since 2010. More information on Nissan in North America and the complete line of Nissan and INFINITI vehicles can be found online at www.nissanusa.com and www.infinitiusa.com, or visit the U.S. media sites nissannews.com and infinitinews.com.

About Nissan Motor Co.
Nissan is a global full-line vehicle manufacturer that sells more than 60 models under the Nissan, INFINITI and Datsun brands. In fiscal year 2017, the company sold 5.77 million vehicles globally, generating revenue of 11.9 trillion yen. On April 1, 2017, the company embarked on Nissan M.O.V.E. to 2022, a six-year plan targeting a 30% increase in annualized revenues to 16.5 trillion yen by the end of fiscal 2022, along with cumulative free cash flow of 2.5 trillion yen. As part of Nissan M.O.V.E. to 2022, the company plans to extend its leadership in electric vehicles, symbolized by the world's best-selling all-electric vehicle in history, the Nissan LEAF. Nissan's global headquarters in Yokohama, Japan, manages operations in six regions: Asia & Oceania; Africa, the Middle East & India; China; Europe; Latin America; and North America. Nissan has partnered with French manufacturer Renault since 1999 and acquired a 34% stake in Mitsubishi Motors in 2016. Renault-Nissan-Mitsubishi is today the world's largest automotive partnership, with combined sales of more than 10.6 million vehicles in calendar year 2017.