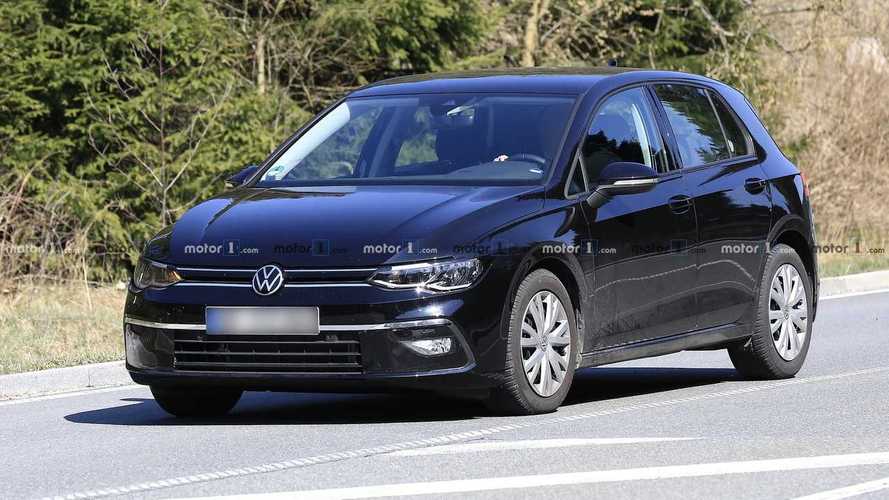 The taillights look weird because they're covered by stickers to hide the real design.

If you look up the meaning of “evolutionary design” on Google, you’ll probably stumble upon an image of the Volkswagen Golf. It looks like it’ll be a similar story with the eighth iteration of the hugely popular compact hatchback as fresh spy shots show the Mk VIII will remain faithful to the tried-and-tested formula.

While some would like to see a bit of variety when it comes to the exterior styling, most people don’t actually have a problem with the car’s oh-so-familiar appearance. Numbers don’t lie – the Golf was the best-selling car in Europe last year even though the current generation was launched way back in 2012. Selling 445,754 units of a relatively aging car is an impressive feat, and it goes to show the immense success of the Golf.

As for this prototype caught by our spies, you’d be tempted to say it does not have any camouflage whatsoever. Look closer and you’ll see there are stickers on the taillights to conceal the actual design, and we believe the real clusters are much smaller than VW wants us to believe. The cutout for the tailgate has a rather unusual design, but the opening might be a bit wider compared to that of the outgoing Golf. If you look around the taillights, you’ll notice two different shades of black, which leads us to believe the tailgate is also almost entirely camouflaged.

At the front, there’s also some camo on the edges of the headlights to partially hide the LED daytime running lights. Those “fog lights” look like stickers as well and seem to be placed on glossy black panels you won’t find on the production car. Those are there to mask the actual look of the bumper, and we must give VW credit for cleverly camouflaging the car’s front fascia.

There’s not much to see at the side profile, other than the fact the upper character line has been raised and is now on the same level as the door handles. The side mirrors look like they’re sitting a tad lower than they are on the current Golf, and the rear doors seem to be slightly longer. It could mean the next-gen model will have a longer wheelbase, which could explain why the fixed glass area of the rear doors appears to be a smidge bigger.

The interior remains a mystery, but VW has made the promise to get rid of most conventional controls and replace them with screens and touch-sensitive surfaces, at least on the high-end versions of its most important car. The possible extension of the wheelbase should translate into more legroom for rear passengers, while the optimized MQB packaging could enable a more generous cargo volume.

VW has delayed the unveiling of the new Golf – originally set for September at the Frankfurt Motor Show – but the Mk VIII will still be revealed before the end of 2019. Next year, both the GTI and the R performance versions will be added to the range, and we’ve been hearing some juicy rumors of a 400-horsepower Golf R Plus.