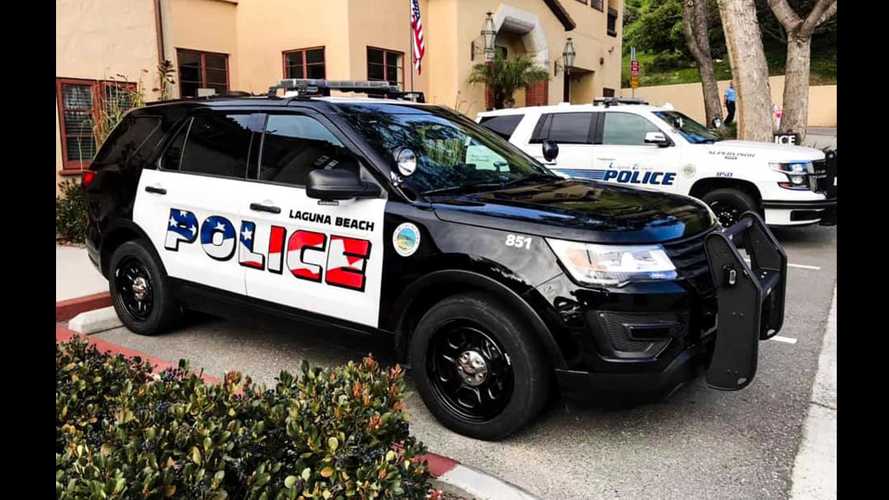 Some people aren't happy with the classic black-and-white look and American flag emblazoned in lettering on the sides.

There isn’t a standard-issue design for police cars in the United States, though a few things are usually expected. Black and white paint schemes have been common since pretty much the first police cars hit the streets, and the word police is usually on there somewhere. One might think that an American flag on an American police car would make sense as well, but the police department in Laguna Beach, California is getting some pushback over incorporating Old Glory onto its new cruiser.

According to the Los Angeles Times, some residents of the seaside town found the police department’s new black-and-white paint scheme with police emblazoned in red, white, and blue rather aggressive. Exactly what that means isn’t entirely clear in the article, save for it simply being an aggressive look that some residents feel doesn’t represent the city. Compared to the previous cruisers, the city’s new design brings back the black-and-white scheme in place of all-white cruisers, with the word police in much larger lettering on the sides. And of course, that lettering is filled with stars and vivid colors from the American flag.

Apparently, the original design proposed to the Laguna Beach City Council wasn’t quite as bold. The article mentions the colors in the lettering had more a washed-out, “cloud-like” appearance. A Facebook post from the Laguna Beach Police Department back in February shows this concept, and yes, the colors are certainly muted.

Aside from those people labeling the look as too aggressive, some have said such a design is disrespectful due to improper flag etiquette. Others have countered that argument by saying the color scheme is merely representative of the flag and not the flag itself, so etiquette doesn’t apply.

Browsing through social media comments for both posts embedded above, we find overwhelming support for the new design. However, the Laguna Beach City Council still plans to revisit the colors and the overall look, and might consider an alternative design. As it stands, the redesign is currently used on seven of the department’s 11 vehicles.

What’s your take on this police car controversy? Share your opinions below in the comments.