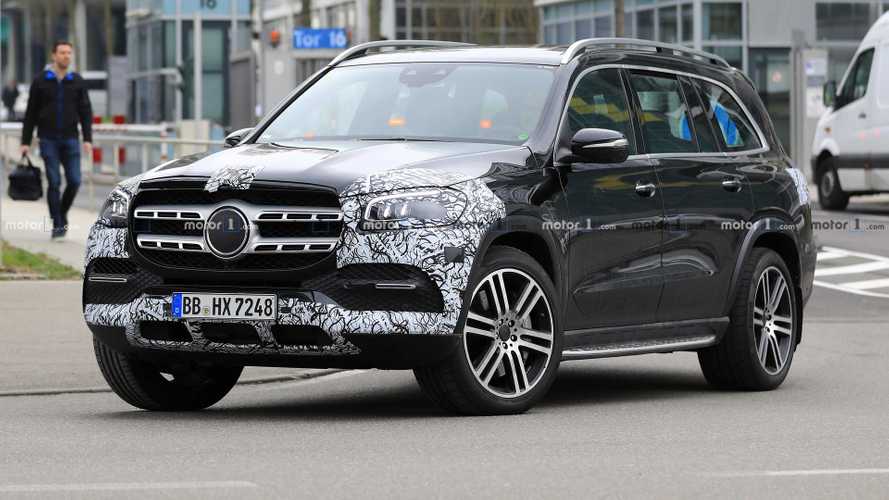 There isn’t much left for Mercedes-Benz to reveal about the new GLS-Class SUV, at least on the outside. The latest round of spy photos caught the big people mover virtually cover-free, save for some terrifically minor camo wrap around the front and rear lights. It’s still effective at concealing details of the lighting designs, but it doesn’t matter too much with the rest of the massive Merc in full view.

The new sighting comes literally one day after catching the sizeable SUV on the road with other Mercedes prototypes. With the GLS-Class slated to debut next week at the New York Auto Show, we figured that would be the last sighting. Those shots featured a vehicle with significant coverings front and rear, but now we can better see rounded edges on the front fascia and grille, not to mention the shapely LED headlights.

At the rear the lower fascia is fully revealed, which sadly shows us a pair of fake exhaust tips. One muffler is visible on the left side behind the bumper but even then, the exhaust is angled down and not through the rectangular tip. Further up, the biggest mystery still remaining on the exterior is the taillight design. That mystery will be solved soon enough.

Mercedes will aim the GLS-Class directly at the BMW X7. Its three-row capacity should offer similar interior space for passengers, but unlike the Bimmer, Mercedes will eventually have a crazy performance version of its range-topping people mover, courtesy of AMG. That model should have over 600 horsepower, possibly borrowing the 630-hp mill from the AMG GT 4-Door. Whether that encourages BMW to pursue an X7M remains to be seen, but that’s a discussion for a different time.

For now, expect Mercedes to offer luxury SUV buyers a GLS-Class that’s extremely competitive to the X7 in terms of space, equipment, and price. We’ll find out just how competitive it is next week at the New York Auto Show.