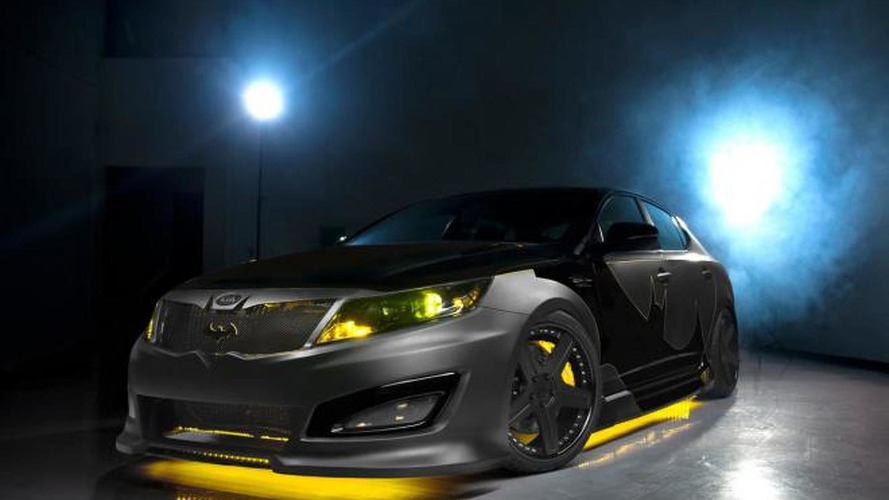 Kia Motors America, DC Entertainment and RIDES magazine have created this Batman-inspired Optima, as part of a campaign to raise funds for fighting hunger in Africa.

Kia’s U.S. division has joined forces with DC Entertainment and RIDES magazine for this Batman-inspired Optima which is being showcased this week at the Time Warner Center in New York City. The design of this tricked-out Optima is influenced by comic book icon Jim Lee and will be part of the DC Entertainment’s We Can Be Heroes giving campaign which will try to raise funds for fighting hunger in Africa.

This special Kia Optima is wearing a matte- and pain-black exterior paint scheme and features a lowered coilover suspension. Other changes include a more aggressive body kit and large Ksport performance brakes. The car rides on a new set of bespoke 20-inch black alloys and features a performance exhaust system.

There’s also a custom front grille that has been shaped like a batwing, a process that took more than 40 hours to complete. Throughout the car are yellow LED accents while etched into the HID headlights is the bat signal. The cabin’s seating surfaces have been wrapped around in black leather and suede with yellow accent stitching, while in the trunk there is a bat suit and a cowl, complete with utility throwing stars located in the center console.

This is the first of eight customized Kias that represent Justice League characters to benefit the campaign.