This Could Be The Unborn Alfa Romeo 4C Quadrifoglio

In a perfect world, these prototypes would be production cars.

Back in the summer of 2014, Car and Driver first reported Alfa Romeo might launch a hardcore Quadrifoglio version of the 4C sports car. FCA’s research and development boss at the time, Harald Wester, commented that the car is “only at 136 horsepower per liter, so there is space.” We were all super excited but, in typical FCA fashion, nothing official happened after that.

Fast forward to present day, the Italian-American company now has an impressive collection of vintage production and concept cars from all its brands under the Heritage HUB facility. A new 20-minute video details some of the cars in that collection and there’s a big surprise. As discovered by Jalopnik, the Heritage HUB also features not one, but two prototypes of the aforementioned Alfa Romeo 4C QV.

First, make sure to jump to the 10-minute mark at the video above – that’s about the moment the two cars show up for the first time. There’s one red and one white cars, both featuring quite aggressive exterior upgrades over the regular model. These include a carbon fiber splitter for the front bumper and a new diffuser for the rear, as well as a massive adjustable wing at the back.

A more detailed inspection also reveals a few additional air openings in the hood and front fenders. Also, you can’t miss the four-leaf clover badges above the front wheel arches which are a clear giveaway these are indeed 4C Quadrifoglio prototypes. We don’t know what’s hiding under the hood, but it’s safe to assume the cars feature an upgraded 1.75-liter four-cylinder engine with more than the stock 237 horsepower (177 kilowatts). 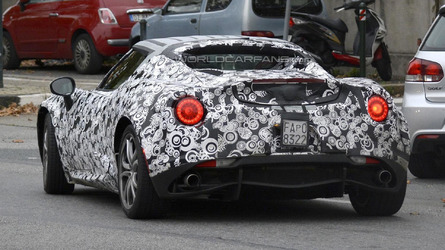 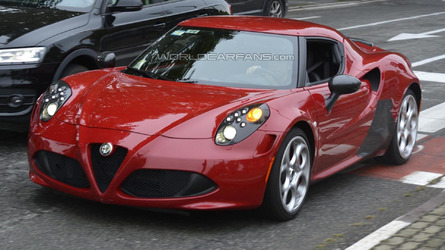 Why these cars never reached the assembly lines? Frankly, we have no adequate answer. It’s probably too late now, but we still have our fingers crossed this is not a closed project for FCA. Make sure to let us know in the comment section below if you happen to know more about these to prototypes.