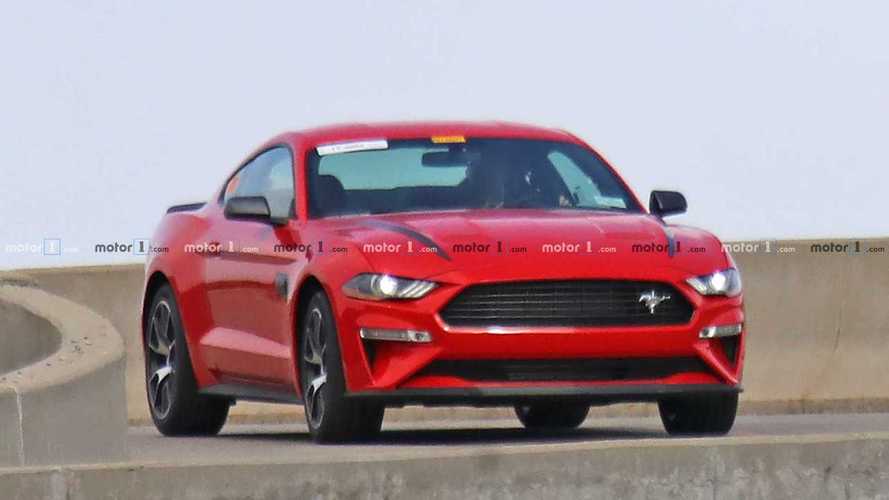 Is it a new SVO? An ST? We should know in a couple of weeks.

Ford will send its new 2020 Mustang Shelby GT500 to dealer showrooms later this year, but it won’t be the only new Pony Car in the stable. Last week we learned that Ford has a new entry-level performance model in the works that should debut in just a couple weeks at the New York Auto Show. Today, we got a few sneaky spy shots of a curious red prototype turning laps at Ford’s Dearborn Proving Grounds.

The Return Of The SVO?

There isn’t a lot to see here, and our photographer wasn’t able to hear much in the way of sound due to the nature of getting photos over the walls at Ford’s big test center. At a glance, this red Mustang doesn’t appear different from the rest, but a closer look reveals fender badges covered up with black tape. The wheels on this car are new, and it’s wearing thin black hood stripes with black side mirrors.

This car also wears some performance package items like a front splitter and thin decklid spoiler at the rear. Speaking of the back, there are quad exhaust tips like you’d find on the Mustang GT, and the faux gas cap in the center is covered up just like the side badges. At this point, our main question is what letters are hiding under the tape. Could it be ST, or as many turbo Mustang fanatics are hoping, SVO?

Should Ford bring back the SVO, or go forward with a different name? Make your case and offer suggestions in the comments section at the end of the article.

Ford already calls this car a new entry-level performance model, so forget about finding a V8 under the hood. The obvious engine choice would be a tuned-up version of the existing 2.3-liter turbo four, which currently makes 310 horsepower (231 kilowatts) in the base model Mustang. Toss in some intake and exhaust mods with an ECU tune, add some suspension upgrades, and voila – you have a new high-output four-cylinder Mustang that would be a great homage to the original 1980’s SVO.

Electrification Is Coming To The Mustang:

There’s another possibility, however. We heard rumors awhile back about a tweaked Mustang in the 335-hp (261-kW) range, and while the EcoBoost four could probably get there without much issue, Ford may also reintroduce a V6-powered Mustang. The S550 offered a V6 when it launched in 2015, but the mill was dropped with the 2018 facelift. A 2.7-liter EcoBoost pulled straight from the Ford F-150 offers 325 hp (242 kW) right out of the box – finding another 10 ponies to create a Mustang ST should be child's play.

Whether it’s called SVO, ST, or something completely different, we should have full details in the next couple weeks.