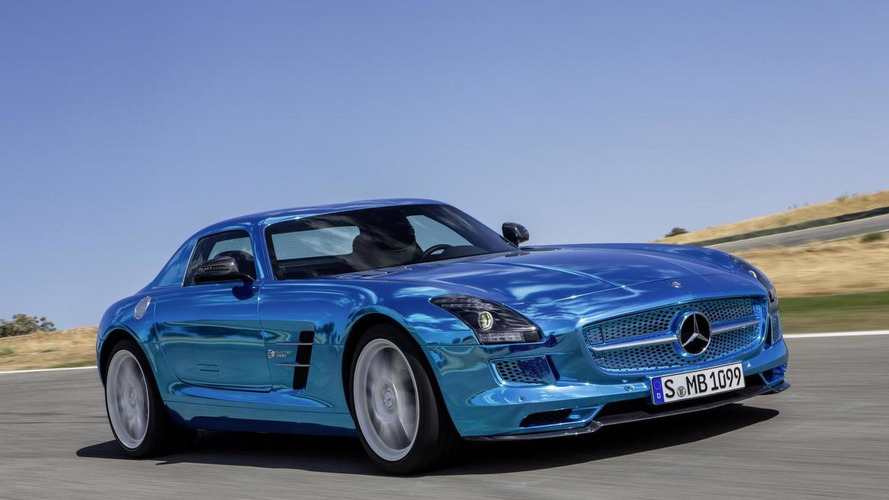 Mercedes-Benz is showcasing the SLS Electric Drive at the Paris Motor Show. Will be out in 2013.

A major surprise at the Mercedes-Benz stand in Paris is the SLS Electric Drive that is being advertised by the German automaker as the most powerful production EV in the world. As you can see, it looks virtually the same as its conventionally-powered sibling, including the gullwing doors. However, you won’t find a combustion engine under that hood because the wheels are driven by four synchronous electric motors which make it a four-wheel drive car.

The SLS Electric Drive has been fitted with two independent gearboxes that provide direct drive to each axle, while the AMG Torque Dynamics system is capable of providing selective drive to individual wheels, based on the type of traction available, and it does this via three different modes: comfort, sport and sport plus.

The German automaker mentions that the electric supercar can perform the 0-62 mph (0-100 km/h) sprint in 3.9 seconds and it can hit an electronically-limited maximum speed of 155 mph (249 km/h). The energy necessary for those electric motors comes from the 60 kWh lithium-ion, liquid-cooled battery pack that weighs 548 kg (1208 pounds). It has been installed within the transmission tunnel and behind the front seats where the regular SLS AMG has the fuel tank.

Since the battery is so heavy, the German engineers had to do something to lower the car’s curb weight so they went for a more advanced aluminum and carbon fiber arrangement, instead of the regular model’s aluminum structure. They also managed to shave off some weight by installing carbon-ceramic brake discs that measure 402mm at the front wheels and 360mm at the back.

The SLS AMG’s double wishbone front suspension has been ditched in favor of a pushrod configuration that uses horizontally-mounted dampers and springs. The SLS Electric Drive rides on exclusive 19-inch alloy wheels with 265/35 tires at the front axle and 20-inch wheels with 295/30 tires at the back.

Scheduled to arrive next year, the Mercedes-Benz SLS Electric Drive will have a starting price in Germany of 416,500 euros (including VAT).