Mr. T On Your Tom Tom 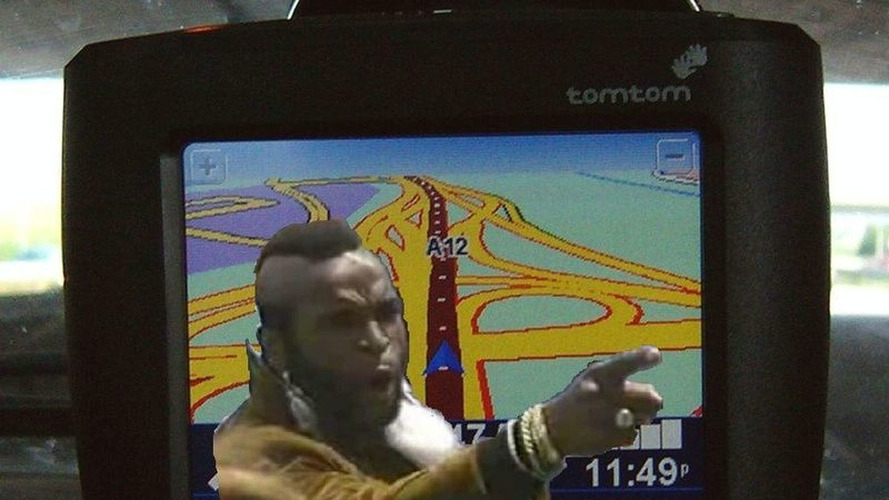 The voice of Clubber Lang blaring through your TomTom should help you get where you need to go.

It seems like ever since I joined up with WorldCarFans at the Frankfurt Auto Show, which started off with a conversation about perennial favorite movie Repo Man, much of my writing has veered into a commentary on 80s pop culture.

Today is no different, for today we learned that if you own a TomTom satellite navigation device you are fortunate enough to be able to have Mr. T tell you your directions from point A to B.  Sergeant Bosco B.A. Baracus himself will let you know when you took the wrong route on your way to work by barking out, “If you were payin’ attention to what I was tellin’ you we woulda got there on time!”

Downloadable from Navtones at a price of $12.95, you can choose from a couple of other celebrities, including Burt Reynolds, Gary Busey, and Dennis Hopper.  Burt Reynolds will call you a “putz,” Gary Busey might suggest “you kindly tell me everything you know, then I promise to kill you quick!” or Dennis Hopper will say, “What are you, high?  How do you know I’m not just bullshitting you, man?  You think I know where you’re going?  C’mon!”

However, the only one I would plunk down the cash for is Mr. T.

Without any question, Mr. T made Rocky 3 my favorite in the Rocky series for three reasons.  First of all, he goes after Rocky’s wife, Adrian, in front of a crowd at the dedication of that awful statue that used to stand in front of Philadelphia’s art museum with the most excellent of lines:

Hey, woman! Hey, woman. Listen here.  Since your old man ain't got no heart, maybe you wanna see a real man?  I bet you stay up every night dreaming you had a real man, huh?  Bring your pretty little self over to my apartment and I'll show you a real man.

Second of all, he killed Mickey.  Mickey was one of my favorite characters, and not just because he was a little Jewish guy with an Irish name.  But Clubber Lang literally scared Mickey to death, by giving him a good push, which resulted in a heart attack.  Ouch.

Third, Mr. T had one of my favorite lines of any movie, which became even better in Spanish.  When asked if he had any predictions for the outcome of a fight with Rocky, Clubber Lang replies, “My prediction?  Pain.”  When translated, this became “¿Predicción? Muerte.”

Prediction?  Death.  This is the person I want telling me how far it is until the next turn.  One of his instructions to the driver actually is, “Shut up and listen to me.”

Unfortunately, we do not know if he at some point sings “Treat Your Mother Right (Treat Her Right),” like he did in his motivational video Be Somebody… Or Be Somebody’s Fool!”

Either way, you know at some point he will call you a fool, and he’ll probably pity you, and that to me is worth $12.95.