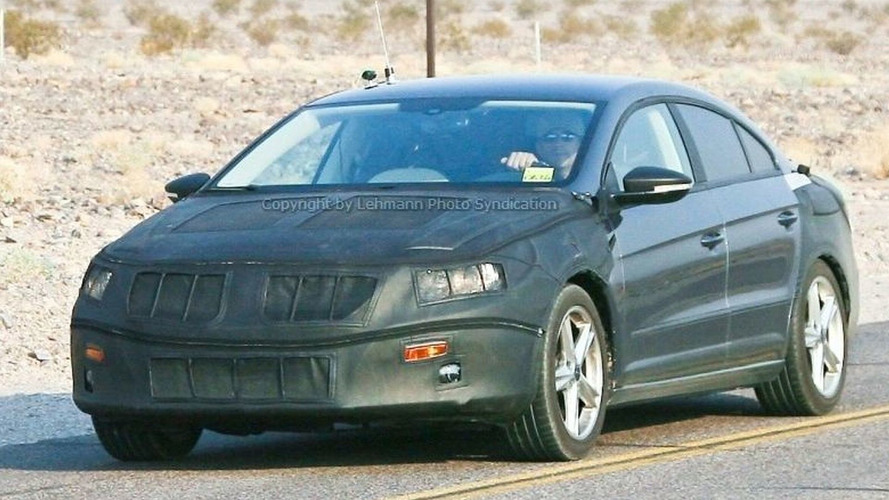 This is Volkswagen's four-door coupe effort spotted during recent hot weather testing in the US ahead of its Geneva Motor Show debut in March.

Volkswagen's stylish new 4-door coupé has been spotted again by our spy photographers, following our earlier spy shots of the vehicle two months ago. Since the introduction of Mercedes-Benz's CLS, four-door coupés have been all the rage, helping makers move upmarket while retaining sports car soul. And this is Volkswagen's effort spotted during recent hot weather testing in the US - ahead of its Geneva Motor Show debut in March.

The final shape is still disguised, albeit thinly, although the front and rear ends remain under heavy wraps. Our computer-generated artist impression does however reveal the sleek new four-door's potential looks - poised but effortlessly dynamic.

A choice of two engines will initially be offered, one being planted in the standard model and the second offered in a sportier version. A 1.8-litre turbocharged TSI engine, capable of producing 160 hp, will be used for the standard version, while a 300 hp R36 model featuring VW's 4-motion four wheel drive technology will top the initial line-up. Further engines will be introduced next Autumn.

The development of this new Passat variant is aimed at markets in the States, Europe and China, but the competition is hot on its heels. Audi's forthcoming A7 four-door coupe, presently in the planning stages, is expected to bridge the gap between A6 and A8 in luxury sports coupe guise, while a coupe version of the next-generation BMW 7-Series is understood to be under consideration by the German firm.

With a Geneva debut most likely, the testing program is likely to conceed more thinly-disguised Passat Coupes to the spy photographers, so stay with us for all the news.