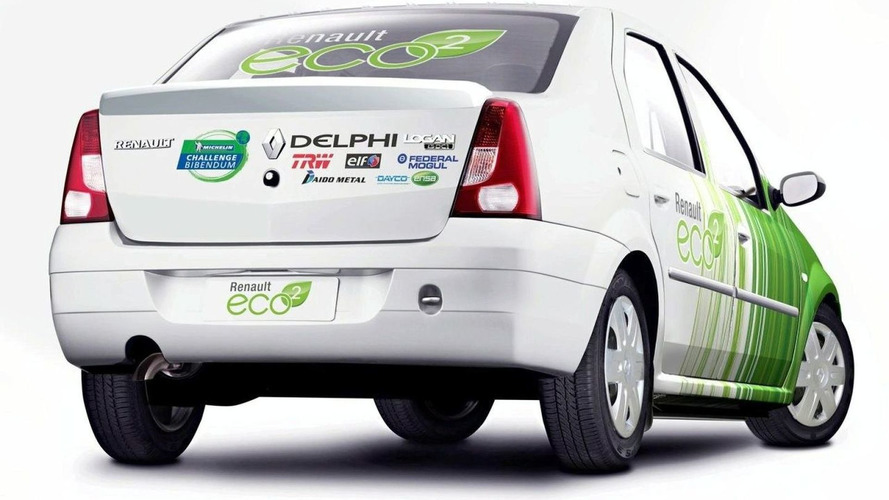 Last May saw Renault launch the Renault eco appellation, a hallmark which underpins the firm's pledge to produce a range of vehicles that are both ecological and affordable.

Back in May Renault launched its new eco2 line spearheaded by the Megane. In order for any Renault (or Logan) car to receive the eco2 badge they must conform to a few strict guidelines. Firstly they should be produced in an ISO 14001-certified factory, emit less than 140g of CO2 per km and they must be 95% end-of-life re-usable and at least 5% of the plastics used must be sourced from recycling.

Renault is keen to put their money where their mouth is by entering the Logan Renault eco2 Concept into the Michelin Challenges Bibendum, to be held in Shanghai, China this year. Last year the competition was held in Paris and was won by a Toyota Prius driven by Paul Bennington and Bart Morren who accumulated only 70 points. Second place was for Mercedes with a F-Cell A-Class, the only Renault to compete last year managed a 21st place with 164 points.

This year Renault is looking to make more of a name for itselve, expecially when it comes to CO2 emissions. The Logan Renault eco2 Concept is powered by a B30-compatible 1.5 dCi engine and emits only 97g/km of CO2 while consuming just 3.8 liter of fuel per 100 km. The concept features modified pistons and injection system, a VORTEX generator (a small, drag-reducing, roof-mounted feature) and low rolling resistance Michelin Pure tyres (185/65 R15). Renault is convinced that the most environmentally friendly techniques are already available to drivers and is setting out to prove just that.