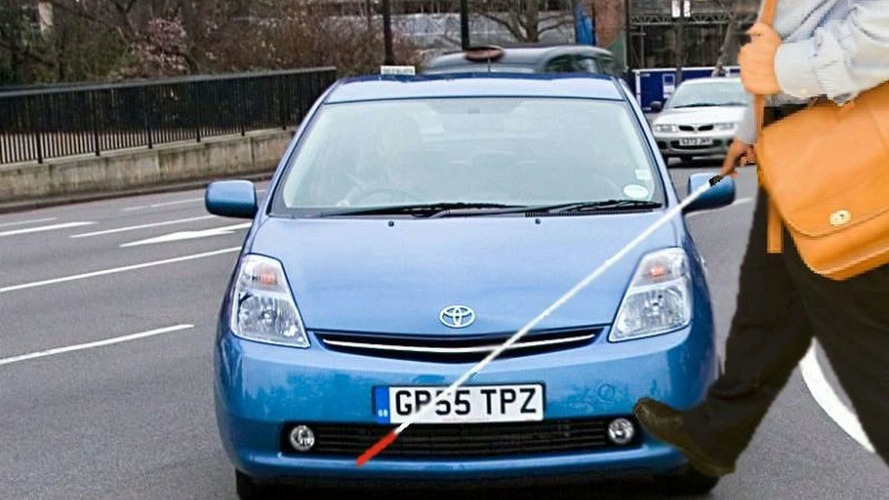 Are new cars, like the Toyota Prius, dangerously quiet?

Gas friendly electric hybrid cars are under fire from at least one group of people.  The National Federation of the Blind believes the cars to be too silent, and a possible threat to the safety of the visually impaired.

"I'm used to being able to get sound cues from my environment and negotiate accordingly," said Deborah Kent Stein, the NFB's chair of their Committee on Automotive and Pedestrian Safety.  In an interview with the Associated Press she says that, much to her surprise, she simply has no clue when a hybrid car, running at slow speeds, is approaching.

"We did a test, and I discovered, to my great dismay, that I couldn't hear it."

Hybrids are nearly silent when running on electric power, something the NFB says is incredibly hazardous.  But with gas prices steadily rising, hybrid cars are becoming more popular.  Year-to-year hybrid sales are up nearly 50% from 2006.

The committee conducted several unscientific tests, with visually impaired people instructed to signal when they were passed by a hybrid while standing in parking lots.  The results were revealing.

"People were making comments like, 'When are they going to start the test?' And it would turn out that the vehicle had already done two or three laps around the parking lot," according to Stein.

A leading advocacy group for nearly 1.3 million blind people in the United States, the NFB is also quick to point out the virtues of hybrid cars as well.  The suggestion is that they simply make a little bit of noise.

In response to a threat from an environmentalist who suggested that NFB President Marc Maurer die in a flood caused by global warming, Maurer said, "I don't want to pick that way of going, but I don't want to get run over by a quiet car, either."

The Association of International Auto Manufacturers Inc., an industry trade group, is examining the issue.  They, along with the Society of Automotive Engineers, are looking into setting a standard minimum noise level for the vehicles.

Toyota is also looking at the issue, according to Bill Kwong of Toyota Motor Sales USA.  However, as Kwong pointed out to the AP, "One of the many benefits of the Prius, besides excellent fuel economy and low emissions, is quiet performance."

Obviously, Toyota does not want to get hit with a lawsuit should a legally blind person get struck by one of their vehicles.

"We are studying the issue and trying to find that delicate balance," Kwong said.

Quiet hybrids are not just threatening to the visually impaired.  57-year-old Linda Murphy has 20/20 vision with glasses on, but that has not stopped her from nearly being struck twice by gas-electric hybrids.

"I'm walking right in back of it and it's moving and I didn't realize it until it nearly touched me,'' she told one reporter. "I never realized how dependent I was on my ears until I almost got hit."