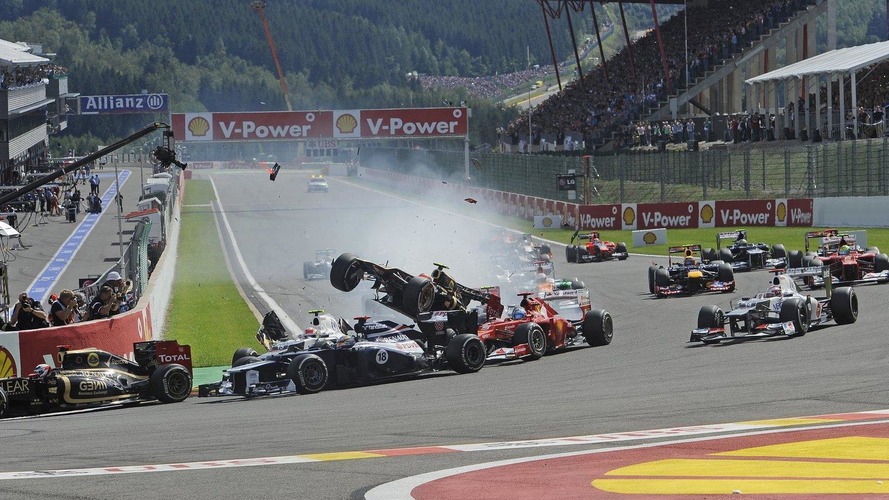 Jenson Button dominated the Belgian grand prix from pole, but Sebastian Vettel had an equally-big smile at Spa-Francorchamps. Despite a poor qualifying, reigning champion Vettel's impressive run to ...

Jenson Button dominated the Belgian grand prix from pole, but Sebastian Vettel had an equally-big smile at Spa-Francorchamps.

After finishing every race of the season until now in the points, Ferrari's Spaniard Alonso was wiped out in a terrifying first corner crash caused by Romain Grosjean, which also claimed Lewis Hamilton and Sergio Perez.

"I wouldn't want to print the words I was thinking at the time," McLaren boss Martin Whitmarsh told BBC One.

"Grosjean just kept coming, for Lewis and the others, it was a shame for all of them and us as race fans. It is not my business to say if a penalty should be awarded.

"If there's one positive," Whitmarsh continued, "it's that Lewis' main championship rival (Alonso) was taken out in the same crash."

But it is German Vettel who leaps teammate Mark Webber in the drivers' chase to become Alonso's closest challenger now, with the gap to the leading Ferrari shrinking from 42 to 24 points with eight races to go.

And following the early-week calls for Button to accept a 'number 2' role to back up his teammate Hamilton, the 2009 world champion has cut his big gap to Alonso from 88 to 63.

"It has not been an easy year for me," Button told Belgian legend Jacky Ickx on the podium. "We are going to enjoy this before we head to Monza and hopefully do the same."