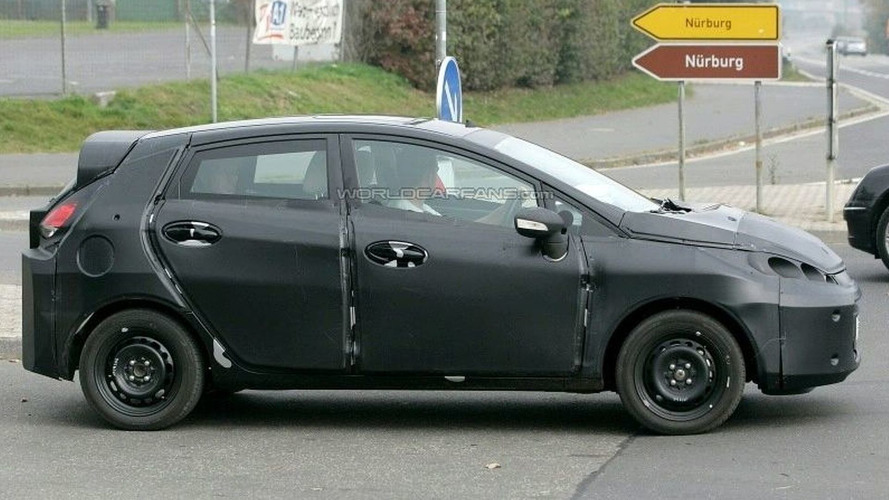 Based around Ford's increasingly prominent European-flavoured 'kinetic' design approach, the next Fiesta will incorporate many of the Verve's aesthetic delights from its elongated 'feline' lights, to its swept profile and poised rear hatch.

The next-generation Ford Fiesta has been snapped again by our spy photographers, this time undergoing testing at Ford's Cologne-based Development Centre on the lonely roads surrounding Germany's Nurburgring. Despite wearing heavily-applied bodygear and faux panels, its bulky physique does however reveal the Mark VIII Fiesta's affinity to September's Verve Concept, premiered at the Frankfurt Show.

Based around Ford's increasingly prominent European-flavoured 'kinetic' design approach, the next Fiesta will incorporate many of the Verve's aesthetic delights from its elongated 'feline' lights, to its swept profile and poised rear hatch, however the camouflage exposes just as many subtle modifications since concept form.

At the front, the Fiesta adopts the Verve's stylish grille shape, although loses the detailing as seen on the concept car. A honeycomb mesh is favoured over the Verve's sleek, horizontally-aligned chrome lower grille slats. 'Feline' lights stretch up the car's side front panel while the A-pillar appears to flow raised onto the bonnet towards the front end - producing a more alluring hood panel, much like the Verve.

Departing the previous-generation's box-design, the new Fiesta is a combination of curves and sharp lines, remaining dynamically faithful to its concept car. The raked roofline culminates in the addition of a rear tailgate spoiler with third-light, although the camouflaged monstrosity of a spoiler is vastly different to the subtle version which will sit atop the production car. The rear lamps are transplanted from the stand to the showroom floor in all but the concept car's red tint, traversing up the beltline rather than a vertical alignment as on the current model.

A line-up largely identical to that of the present range's will be on offer, with petrol engines ranging from 1.2 to 1.6-litres. Two TDCi diesel powertrains will also be available, while the addition of a 1.6-litre TDCi Fiesta ECOnetic model will further enhance Ford's green range.

Market entry into the States is likely, with a version of this five-door version being re-packaged to adhere to Ford's American model range and US crash safety regulations. However, modifications are expected to be kept minimal to retain its European charm, changes for the US market being contained to the front fascia and specification.

Stay tuned for more information on the next Fiesta ahead of its Spring release.