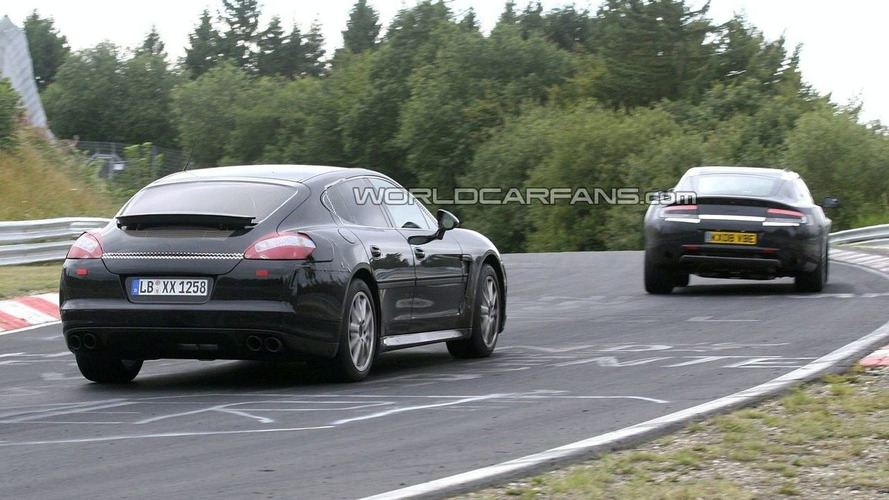 Scheduled for an official presentation at the 2009 Geneva show, there are two new four-door coupés testing at the challenging Nürburgring at the moment.

Scheduled for an official presentation at the 2009 Geneva show, here are two all-new four-door coupés testing at the challenging Nürburgring. Both, the fourth range from Porsche, known as the Panamera, and the all-new Aston Martin Rapide, are developed to be strong competitors to the Mercedes CLS and the future Audi A7.

Though the Panamera takes over design elements from the 911 range, there will be significant differences, too: While the first has always been to keep its rear-mounted boxer engine, the newcomer will have a choice of three front-mounted motors, though set back to the centre of the car as much as possible. The entry-level unit will be Volkswagen’s 3.5-litre six-cylinder unit developing 300 bhp, while Porsche’s own drivetrain will be a direct-injection eight-cylinder petrol engine, available in naturally-aspirated guise (350 bhp) and with twin-turbo (560 bhp).

That should be enough to beat out the competition for a while: Mercedes’ CLS 63 AMG comes up with “only” 514 bhp. However, should Stuttgart make the CLS even stronger, Zuffenhausen would strike back with the Porsche GT’s 700-bhp ten-cylinder unit ...

The target for the Panamera is to be a true sportscar while at the same time it shall be a family-car for every-day use with four full seats, easy access to the rear and a luggage compartment of around 450 litres. When it hits the road in 2009, Porsche hopes to be able to sell 20 000 units annually – and to jump over the barrier of 100 000 sold cars per year.

Yet more exclusive will be the new four-door from England: Following the Rapide Concept shown at the North American International Auto Show in Detroit back in 2006, Aston Martin is now coming up with the real machine. Former owner Ford had put the project on hold when they decided to sell the biggest pack of shares. After selling this to the group lead by David Richards, one of the first decisions was to revive the project and start developing the production version Rapide. Together with the body, the DB9 will provide its platform and its V12-engine. The latter will be tuned to 480 bhp while it delivers 450 bhp in the DB9. The car is believed to be released in 2010.