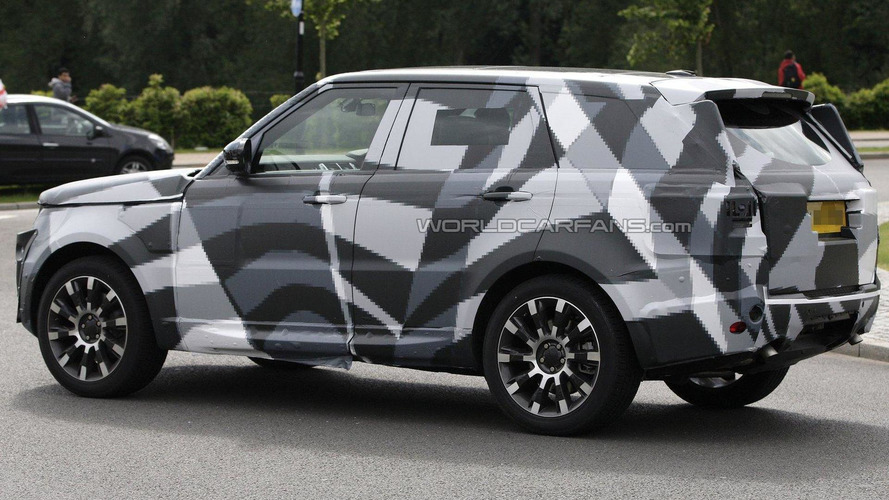 At first glance spies thought it was another Range Rover, but after closer inspection they realized it was actually the Range Rover Sport.

Shortly after spy photographers snapped the 2013 Range Rover yesterday, another prototype with different camouflage was spotted. At first glance spies thought it was another Range Rover, but after closer inspection they realized it was actually the Range Rover Sport.

Compared to yesterday's photos of the standard Range Rover, this prorotype not only wears the best camouflage we've seen, as it makes the photos appear blurry or out of focus, but has completely different headlights and taillights. Looking at the side body, the vehicle seems to be lower with a sportier profile. This is due to the rearward sloping Evoque-esque roofline which results in a shorter greenhouse as seen in the lower side windows. The rear liftgate glass is also slightly more rounded and pitched at a less steep angle. The prominent side sills also aid in the sportier stance.

Petrol and diesel engine are expected to carryover, but slightly more fuel efficient. Also expected to give a boost to efficiency is the model's new aluminum-intensive platform that was co-developed with Jaguar. Previous reports have indicated the platform could enable the SUV to weigh 400 kg (882 lbs) less than its predecessor.

The 2013 Range Rover could be unveiled at the Paris Motor Show this September. A plug-in hybrid as previewed with the Range_e concept is planned to arrive in 2015.