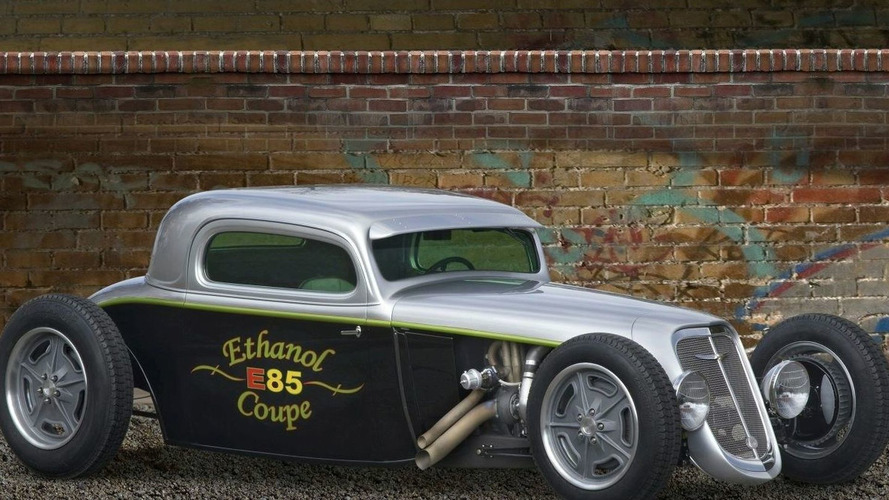 With a 500-horsepower engine, a channeled body and a chopped top, GMÃ¢â‚¬â„¢s custom street rod looks right at home on the salt flats of Bonneville.

The Hot Rod embodies the American performance scene with seriously tuned V8's in mostly pre-WW2 cars. The 1934 Hot Rod preprared by GM Performance Parts for this year's SEMA show is no different. Well, no different on the outside that is, under the partly absent hood lies a brand-new 2.0 liter Ecotec engine producing some 500 hp which runs on E85 ethanol fuel. Bryan Nesbitt, vice-president of General Motors North American Design: "The ethanol Hot Rod is a modern statement that today's hot rodder can address energy concerns about the consumption of petroleum without sacrificing performance or style.”

The '34 FlexFuel Hot Rod is based on a 1934 Chevy but sits on a one-off frame and body with factory and aftermarket parts to give the hot rod a proper traditional look. The slanted grille and hood have been integrated for a smoother look, the headlamps are attached to the core support and rides on 18-inch wheels in front and 20-inch in the back. The interior features aluminium race seats, traditional looking hand-finished dash and is centered around the driveshaft tube.

The engine has been enhanced with a larger turbo and GM Performance Parts' Stage III performance kit, combined with the higher octane of the E85 fuel the horsepower levels are raised to over 500. All that power reaches the road through a GM Powertrain 5L40 five-speed automatic transmission. “The engine was built using the basic recipe that is available in the Ecotec performance book available from GM Performance Parts,” said Al Oppenheiser, GM Performance Division director of concept and vehicle integration. “Also, the E85 conversion is based on a kit that GM is exploring for regular production engines.”