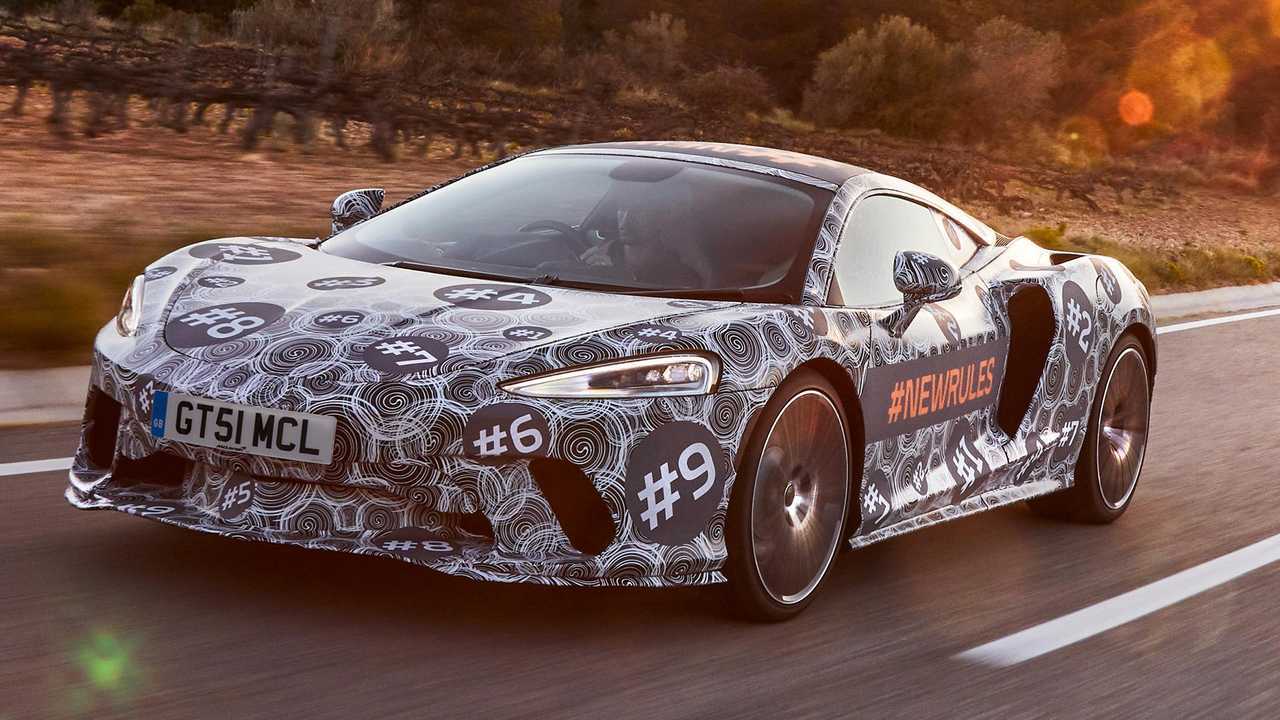 Forget the track, this is a McLaren for long distance trips on the road.

First teased in early March, McLaren's upcoming grand tourer hits the road again in new images that whet the appetites of wealthy potential buyers. The company promises to start ripping off the camouflage on April 30. The concept of a more comfortable McLaren model that specializes in eating up miles at high speeds continues to be very intriguing.

McLaren GT Debuts As The Practical Supercar With 620 HP

The model's actual name still isn't clear, and the brand simply refers to it as the McLaren of Grand Tourers. According to the company, the example in these photos shows off the vehicle's final shape, and the body no longer wears the fake body panels from the coupe in the previous teaser shot (below).

The new shots reveal a more curvaceous rear deck. There are vents at the top of the fenders. Skinny LED taillights cut through an opening in the tail. A pair of big exhausts with chrome tips grab attention because of their visual contrast with the rest of the design.

In front, the design is fairly simple with a low nose and pointy headlights. An expansive, wraparound windshield looks like it would offer excellent forward visibility.

Check Out The Original Teaser:

Currently, McLaren only confirms that the grand tourer gets power from a twin-turbo V8. "It’s a car that has been designed for distance and one that will also provide the comfort and space expected of a Grand Tourer. But with a level of agility never experienced before in this segment," McLaren CEO Mike Flewitt said when originally announcing the model.

The next step in the development is a 1,000-mile (1,609-kilometer) trip from McLaren's development center near Barcelona, Spain, to the automaker's headquarters in Woking, England. To check the vehicle's level of comfort, the two test drivers plan to take the journey in a single stint while carrying all of their luggage.

For one more look at McLaren's grand tourer, take a look at the shot above. The photographer Alex Alexiev works as a designer at McLaren, so this image blurs the line between a spy photo and an official teaser. Unfortunately, the picture comes from before the removal of the extra concealment panels from the body.

The McLaren of Grand Tourers reveals its sleek, elegant shape
First announced by CEO, Mike Flewitt, during McLaren’s Geneva press conference
Disguising camouflage to be removed from April 30, 2019
The fourth McLaren to be revealed under the company’sTrack25 business plan
Follow mclaren.com/newrules
McLaren has removed the shape-changing, additional body panels previously used to hide the form of its imminent, rule-breaking ‘Grand Tourer’. The car’s sleek and boldly elegant design can now be discerned although the lightweight body remains covered by a shrink-wrapped livery that suggests the number of established rules the McLaren of Grand Tourers will break. The company is promising it will begin to peel off this disguise this May.

The application of the shrink-wrap will also enable the Development Team to enter the closing stages of the car’s extensive evaluation program, which has already encompassed thousands of miles in hot and cold climates across the globe. The ‘Grand Tourer’ has proven its ability to cover long distances in supreme comfort, but always with extra shape-changing and noise-inducing panels applied. Now that these have been removed, the Development Team will run further validation tests, including a 1,000 mile drive from McLaren’s development base near Barcelona, Spain, back to the McLaren Technology Centre in Woking, England. To be completed in one stint with two occupants and a full complement of luggage, this is one of many long-distance drives that will help the team to confirm the new model is both comfortable and refined over the long distances a grand tourer is expected to consume … one rule that McLaren won’t be breaking.

The McLaren of Grand Tourers was announced by McLaren Automotive CEO, Mike Flewitt, during last month’s press presentation at the 89th International Geneva Motor Show. He promised that the fourth car to be launched under the company’s Track25 Business Plan will combine competition levels of performance from a twin-turbo V8 engine with continent-crossing capability and a level of agility never experienced before in the luxury Grand Tourer segment. He stated that the McLaren of Grand Tourers will be the most usable mid-engined car yet. The McLaren of Grand Tourers will also be the only one to share its DNA with a Hyper-GT: McLaren’s Speedtail. Mike went on to say that the car - a name is yet to be announced – won’t be part of any of the company’s existing model Series and will be a unique, tailored model. Its interior will feel spacious, uncluttered and modern with only authentic, high quality materials employed.