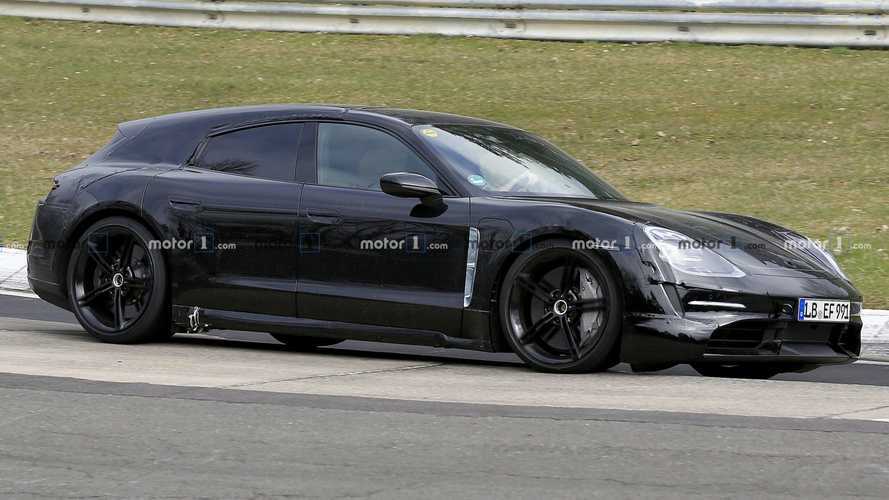 Who said the Germans don't have a sense of humor? Look at those "exhausts."

A brand mainly known for creating exciting two-door sports cars, Porsche has expanded its portfolio to include three SUVs, a sedan, and even a wagon. Later this year, the lineup will further grow to include another sedan, which will eventually be joined by this – another wagon. These two new arrivals will be vastly different than familiar nameplates such as the 911, Boxster/Cayman, and Panamera as the Taycan duo will eschew the combustion engine in favor of a pure electric setup.

The regular Taycan sedan due in September at the Frankfurt Motor Show has been spied and teased to death, but the more practical Taycan Cross Turismo is still somewhat of a rare sight on the Internet. Shown as a concept a little over a year ago in Geneva, the rugged wagon in prototype form has made the trip to Germany where it’s currently undergoing testing at the Nürburgring.

Featuring a raised suspension, the long-roof Porsche has a pair of comically fake exhaust tips and is wearing a lot of camouflage even though at a first glance it might look undisguised. There’s black tape at the front and rear, along with stickers on the headlights and taillights to hide what will likely be a Panamera-esque design.

The technical specifications are already pretty much known considering the Taycan Cross Turismo is expected to utilize the same electric bits as the sedan. The latter will have more than 600 horsepower from two electric motors and a battery pack with enough juice for a range between charges of at least 310 miles (500 kilometers). The sedan will need three and a half seconds to reach 62 mph (100 kph), but the wagon might be a tad slower due to its higher weight.

Spec for spec, the Cross Turismo will surely command a premium over the regular model, much like the Panamera Sport Turismo is pricier than the standard Panamera.

Porsche says it will launch the Taycan Cross Turismo “at the start of the next decade,” so expect the production version to debut sometime in 2020.