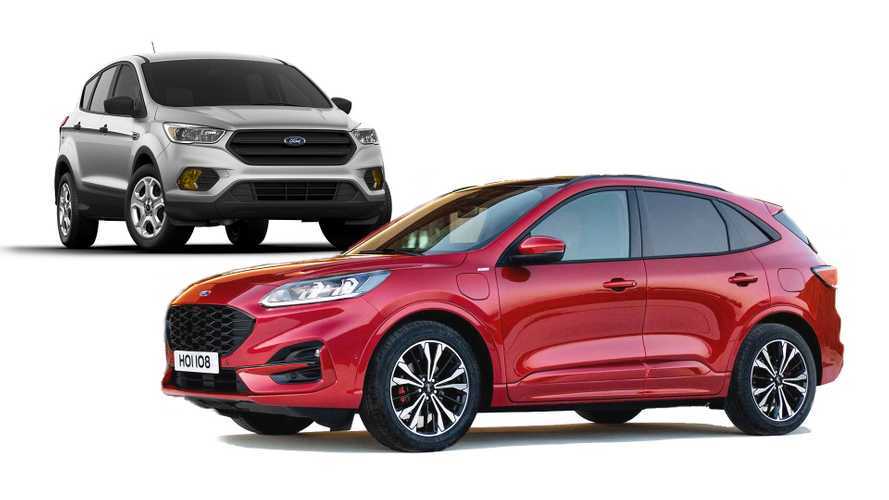 With the debut of the new 2020 Ford Escape (Kuga in Europe), the compact crossover is now 19 years old – nearly old enough to imbibe with its Explorer sibling. And a lot has changed in two decades. This new Escape looks nothing like the original, nor even the most recent model that came before it.

For 2020, the Escape shares more in common visually with the European Focus and Fiesta. It borrows the same grille and similar headlights, and even has a lot of the same hatchback-esque cues at back. But how does it stack up to the previous Escape in terms of looks? Take a look at the two crossovers side-by-side (note: European model pictured).

Like we said, the 2020 Ford Escape is a far cry from its predecessor. The front fascia is very Focus-esque, and ditches the chrome six-sided grille (on the Platinum model pictured here) for a black-mesh trapezoidal fixture instead. The headlights are the only parts that look similar, but even then, the new Escape's lower LED accents and dual bulbs are a significant contrast to the outgoing model. Even the fog light housings are different; the new Escape has unique styling elements that carry over from the bumper, whereas the outgoing Escape has a more traditional look.

Looking at these two cars from the side, it's easy to see how dramatically different they are. The new Escape is longer, lower, and wider than the old one (though it's 200 pounds lighter) – and it's smoother shape is more appealing. Aspects of the larger Edge and even a pinch of the Alfa Romeo Stelvio are noticeable in its DNA. But nothing carries over from the previous generation, not even the side mirrors.

The backside of the new Escape isn't just out-of-the-ordinary for this nameplate – it's unlike any Ford product we've seen. Sure, there are some inklings of the Edge, but the new Escape has a unique look that makes it entirely unique for the Blue Oval. The taillights are sleeker, the dual exhaust tips have a body-colored surround, not silver plastic like the previous gen, and there's a more defined diffuser over the rear window accented by piano black trim. The new Escape looks great from the back.

The 2020 Ford Escape adopts a lot of the same interior elements as its larger Edge and Explorer siblings; the digital instrument cluster, iPad-style infotainment screen, and questionable rotary shifter chief among them. Compared to the old Escape – with its embedded infotainment screen, traditional shifter, and analog instrument cluster – this looks like a completely different vehicle. And the materials look a lot nicer at first glance.